Plan your custom-made trip to
Cambodia
with a local agency !

Why leave to Cambodia ?

After the destruction of the war and political isolation, Cambodia gradually opened up to world tourism thanks to its rich historical heritage. Seeing Angkor is like seeing the Pyramids: there are not many places in the world that can offer such sensations. The sites are increasingly visited, especially by Asian and Chinese tourists, the vast majority of whom are from Asia and China. Cambodia is changing very quickly today, but for sure, it will not leave you indifferent!

Preparing for your trip to Cambodia

Cambodia's great asset is the kindness and simplicity of its people, when you move away from Phnom Penh and Siem Reap. It is therefore necessary to take the time to discover the country by your own means and do not hesitate to go out of the easy routes.

The richness of history

Cambodia has an ancient and glorious history, one of the most dazzling in the world, with Angkor and the remains of the largest city built in the 13th century. However, this period between the 8th and 15th centuries that we thought we had mastered has recently been called into question by discoveries made by French archaeologists, Eric Bourdonneau and Jacques Gaucher, which have upset our beliefs about the functioning of temples and the meaning of their architecture and statuary. Nearly 150 years after their discovery, the ruins of Angkor still have secrets to reveal. The lack of maintenance and resources, abandonment, degradation of all kinds, looting - not to mention historic sites that have been used for military purposes - have seriously damaged these treasures. Not to mention that Buddhism was elevated to a crime under the Khmer Rouge regime, many religious objects, monasteries and statues were destroyed during this black period. Finally, as if fate was raging on the most extraordinary religious site in the world, a fungus is inexorably attacking the sandstone of monuments, threatening to wipe out even more quickly the last traces of Khmer civilization forever. A civilization for which there is little evidence of reunification before the Angkorian period, except for a stele, that of Sdok Kok Thom in Sa Kaeo province, Thailand.

Between adventure and discovery

Adventure is still possible in Cambodia with the minimum of risks inherent to any expedition sometimes sporting in a harsh nature. The Khmer Kingdom can be discovered in total freedom, provided that we take the time and a few precautions... The motorcycle can be the ideal vehicle since it allows us to go anywhere and explore certain places that are difficult to access independently. Joining the cities of Siem Reap and Kratie through the Cardamom chain is an example of what Cambodia has to offer in terms of human adventure and discovery. But public transport also remains a solution for living in movement with the local population. Finally, flying is an option to consider for those who lack time, certainly less economical than the bus but much more comfortable and much faster. The plane promises short and relatively affordable journeys, airlines offer tickets between Siem Reap and Phnom Penh for 50 . Practical, there are also flights between Sihanoukville and Siem Reap.

Temples, rice and palm landscapes, rivers and mountains provoke aesthetic emotions that are constantly renewed. And the kindness of the local population never leaves anyone indifferent. It is clear that this country has many surprises in store. The famous "yellow disease" can, for our greatest happiness, strike at any time: this country fascinates, and it is not uncommon to fall in love with it. Exoticism, beauty and adventure have something to do with it, as does compassion. We are necessarily concerned by the tragic fate of this people so endearing that we would like to help... so as not to abandon ourselves to fatalism! 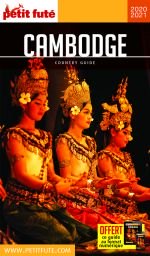