Plan your custom-made trip to
Angola with a local agency !

Why leave to Angola ?

It has been a little over ten years since peace returned to Angola. "Tourism is the industry of peace" as the Angolan tourism stakeholders rightly say. Tourists are still rare there except the Angolans themselves who (re)discover their country with happiness, and some privileged expatriates. International sport fishing tournaments and bird watching already attract enthusiasts, such as the "saudade" stays of the Portuguese (often left in 1975) and remembrance tourism, with some former Cuban and even South African soldiers. Few people, therefore, which leaves room for adventure. It follows that the probability of being alone in front of remarkable natural sites is very high and that is already a privilege and an immeasurable happiness!

Preparing for your trip to Angola

We dance the semba, the kuduro, the kizomba.....Luanda's Marginale takes on its festive air every year for the carnival, which is nearly 150 years old, with official parades, disguised city residents, songs and dances. For three days, the city lives to the colours and rhythm of the carnival. It's a celebration in the bay of Luanda! Carnival, with its long preparations and rehearsals, is taken very seriously in Angola. In addition to Luanda, Lobito, Cabinda and Lubango are among the other great carnivals in the country.Music is the flag of Angolan culture! Music, sung mainly in kimbundu, umbundu, kicongo and Portuguese, occupies the largest place in the national cultural domain. It is the main form of expression. Music is the entertainment and transmission tool of Angolan popular culture. For a long time, it has been the voice of contestation and the safeguarding of a devalued, abused and dominated identity. A desire to live, a pleasure of celebration against violence and injustice.Semba, kuduro and especially kizomba, an irresistible traditional tempo with arrangements inspired by the skillfully mixed sounds of techno music, nowadays make people dance! Kizomba means "celebration" in kimbundu.

A land of welcome and contrasts

From the mythical and northern Congo River, to the Kunene flowing south in the Namibe desert, Angola stretches along more than 1,600 km of Atlantic coastline. On the other side of the river, the exclaimed province of Cabinda and its extraordinary tropical forest, between the Atlantic Ocean and the two Congo, as well as the high plateaus and their amazing landscapes. Everywhere you can find huge spaces and unexplored places, but also encounters with open-minded, smiling inhabitants: pre-Bantus peoples, land of kingdoms that has suffered more than four centuries of Portuguese occupation, the third largest economy in sub-Saharan Africa (after South Africa and Nigeria), a region rich in oil and diamonds in full economic expansion and giant steps forward!This land of hospitality and contrasts awaits adventurous visitors, curious to discover one of the last African destinations to open up to tourism.

An important mix of cultures

Four centuries of crossbreeding. Portugal's long presence on the coast and the historical dynamics of racial and cultural mixing have led to the emergence of a Métis society, particularly in cities. Inter-white" is uncommon in Angola. Not a hotel, not a restaurant, not a bar, not a beach, where everyone meets and mixes. And that's good.

When to go to Angola ? The best time, activities, seasons, climate, temperatures, weather 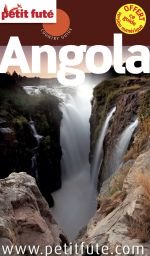