Plan your custom-made trip to
Australia with a local agency !

Why leave to Australia ?

Australia is a young state, marked by a little over two centuries of European presence, but it is also the land of the world's oldest culture, that of the Aboriginal people. It is a modern country, with American-style cities like Sydney or Melbourne (the two most visited cities), but also a virgin hinterland, the Outback, where the roads are tracks and where the pace of life has remained close to that of the first settlers.

Preparing for your trip to Australia

A unique fauna and flora :

Thanks to its isolation over millions of years, Australia has developed an exceptional fauna and flora, such as kangaroo and koala or gumtree and tree ferns. These are just a few of the many sights you will discover on site. It is relatively easy to cross animals and you will be captivated by the beauty and scents of the many plants and flowers unknown in our latitudes.

Australia's landscapes are unique. The absence of major geological upheavals, a contrasting climate and erosion have created landscapes that you will not see anywhere else. However, be patient throughout your trip as the country is huge and has little diversity in some places. The purity of the sky and the vastness of the landscapes will often compensate for the monotony sometimes felt.

Australia is a sacred land revered by the Aboriginal population, including the Eora and Guringai tribes, since time immemorial. Although many traces of their presence have been destroyed with the urban development of the past two hundred years, some remain accessible and provide an insight into their culture. The Sydney area has one of the largest concentrations of Aboriginal rock carvings in Australia. More than 4,000 sites containing rock engravings have been discovered, including 600 in the urban area.For the Aborigines, Sydney's name was called "Djugulu", referring to Bennelong Point, where the opera was located, while "Cadi" referred to the entire bay.Aboriginal art, which is widely marketed, is found throughout Sydney. Open your eyes wide to this city that has become one of the largest outdoor art galleries in the world.

The first waves of Anglo-Celtic migration from Europe put the pot on the fire... Between local products and British inspiration, the first stoves in the city's inns and pubs, where English prisoners and sailors were busy, inaugurated what Australian gastronomy is today. Then, over the years, Sydney, which is at the gateway to Asia, has naturally benefited from a significant influx of migrants from Asia. The city's cuisine has therefore been inspired by flavours from all over the world, making the city a world-class and international culinary melting pot where everyone's taste is at stake: Chinese, Japanese, Korean, Indian, Thai, Vietnamese, Malaysian, Singaporean, Indonesian, French, Italian, Greek, Lebanese, Turkish and Indian. A wave of new chefs and young professionals in the hotel industry is skyrocketing, taking these kitchens to new heights by betting on what is now called the new Australian cuisine, or Fusion food or Mod'Oz.

Relaxed, unruly and oriented towards natural spaces, Australians are welcoming. Sport and leisure activities are the main topics of conversation during the evenings around the must-see barbecue. "No worries! " (no inquiétude !) is a common expression that sums up the minds of the people of "Down Under".

If you are between 18 and 30 years of age at the time of your application, Australia is accessible to you with a Working Holiday Visa (WHV). The WHV will allow you to work to finance your trip for one year. It is renewable for those who have opted for agricultural or harvesting work. Don't miss this unique opportunity to discover a thousand new things.

When to go to Australia ? The best time, activities, seasons, climate, temperatures, weather 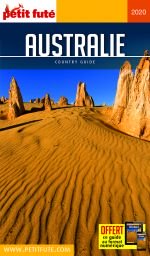