Plan your custom-made trip %
Congo Brazza
with a local agency !

#Where the tourist becomes a traveller Despite its 170 km of coastline and almost as much fine sand, its forests with rare species and species and its sumptuous natural landscapes, Congo has never been promoted as a holiday destination. It is therefore not a destination for mass tourism and, unless there is a radical change in general policy, it will probably never be. You will find places with few maps, a few trails to open and a curiosity that is often benevolent towards foreign countries. A country where the human dimension takes on its full meaning, where tourism remains a craft industry in a world where it is an industry, even if times are changing and Congo, which has found peace, has opened up to the financial and human flows of globalization, gradually becoming aware of its tourist assets. Offer yourself the privilege of still being considered as a person rather than a tourist.
"Civilized to the bone marrow! :

... was thrilled to discover the peoples of Congo the German ethnologist Leo Frobénius who undertook nearly a dozen expeditions to Black Africa between 1904 and 1935.If today the notion of "civilized" has colonial overtones, the Congolese are still, for the most part, people who show, without affectation, a delicate politeness.We can here (if we know how to smile and show respect) get lost without worries, go to the heart of the neighbourhoods, ask for directions, be guided. Rare carelessness and freedom...

More precious than oil: the energy that the Congolese deploy in their pleasures. A laughing vitality, a mobility and a greed for things that makes everyday life vibrant. In the evening, this energy finds another field of expression in three of the great Congolese passions: dancing, beer and seduction. The Congolese night pulses, from the sidewalk of the working class districts to the fancy boxes in the city centre, even if it may seem provincial compared to the one in Kinshasa with its boxes that never close. The conviction that everyone puts to have fun and to display his presence on the night's mercato is worth its weight in ginseng... "We're here! "say the Congolese. With the added bonus of security.

The magic of the Congo forest

As soon as you enter the land, the diversity of biotopes is matched only by the opulence of the landscapes. Congo, irrigated on all sides, generously watered, is a nourishing land with exuberant flora. The vegetation is declined in primary dense forest, flooded forest, gallery forest, but also savannah, steppe, papyraie, mangrove, floating meadow... Congo is, out of the two big cities of the country - and again - the green heart of Central Africa, the second lung of the planet. The country's many nature reserves will allow you to discover a varied African fauna, even if the conditions are sometimes sketchy, with the exception of the Conkouati parks in the south or the Léfini to Brazzaville, where the comfort conditions are better, not to mention the Odzala park in the north of the country - unique, with its South African lodges. But the forests of the Sangha and Likouala surrounding it, whose heart is the privileged territory of the Pygmies, remain lands that are difficult to access and travel... Whatever the type of approach desired, whatever the minimum comfort required, the traveller evolves in Congo outside the standard criteria of the tourist industry. Because people come to Congo, if not to work there, to resolutely get off the beaten track. 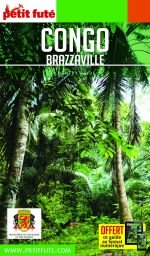