Plan your custom-made trip %
Ecuador
with a local agency !

#The infinite spaces Despite its small size, Ecuador has a sense of space and grandeur in each of its regions. Crossing the country from north to south, the majestic Andes mountain range (or Sierra) stretches into vast green plains, colourful lagoons, volcanoes with snow-covered peaks and plantations whose checkerboards nibble at the sides of steep valleys. On the Pacific coast, from Esmeraldas to Salinas, long stretches of golden or grey sand line steep cliffs. Finally, covering nearly half of the territory, the Amazon contains immense dense and tropical forests, in which animals are kings.
The mythical Amazon :

The Oriente is a dense and inextricable world from which one does not return unscathed. Such an adventure on Amazonian territory will leave its mark on people's minds forever, as the sensations are multiplied tenfold and the discoveries numerous. Exuberant vegetation and extraordinary fauna, a quiet atmosphere that may seem distressing... the forest is one of the last remaining sanctuaries of wildlife, but for how long? In this world apart, you can see anacondas, boas, caimans, piranhas, Amazonian dolphins, tarantulas, monkeys, toucans, a plethora of multicolored birds, and perhaps even lazy, jaguars and other rare animals. On condition, of course, that you sink deep into the forest.Amazonia is also the cradle of certain ancestral ethnic groups - Secoya, Siona, Huaorani, Quechuas, Mantas, Záparo, Shuar, Huancavilcas and Cófan - who try, against all odds, to resist the failings of modern civilisation. Budding anthropologists will thus have the opportunity to familiarize themselves with their way of life, in harmony with nature, as well as with their medicinal know-how and shamanic traditions... Sharing the chicha (typical drink), hunting with a blowgun or consulting a shaman are all unforgettable adventures to be experienced in this unique place.

In recent years, the country has become aware of the extraordinary richness of its fauna and flora, and many natural areas are now protected. Recently, local authorities, associations and private foundations have been increasing their vigilance. Thus, national parks and reserves protect many plant and animal species from human greed and aggression. From the jungle to the Sierra to the Galapagos, nature lovers will have a great time. Not to mention a detour to the Mindo Ornithological Reserve, located in the province of Pichincha, where more than 300 bird species are recorded.

The Galapagos archipelago, a unique territory

Otherwise known as the Colon Archipelago, the Galapagos constitute a world apart that emerged millions of years ago in the heart of the Pacific Ocean, some one thousand kilometres from the coast, where time is suspended. It was there, in 1835, that the English biologist Charles Darwin studied the natural evolution and selection of species. In the middle of lunar landscapes, iguanas, sea lions, giant turtles and thousands of birds (masked or blue-legged madmen, pelicans, flamingos, frigates, herons, Galapagos oysters, mockingbirds, Darwin finches, cormorants, etc.) live together in a disconcerting harmony, without fearing the presence of Man. Animals with a prehistoric physique therefore, but also a multitude of underwater inhabitants inhabit the depths: manta rays, red and black crabs, sharks (Galapagos, grey, hammerhead, tiger, whale and horned shark) and a multitude of multicoloured fish.

In Ecuador, the diversity of the landscapes allows you to enjoy a multitude of varied activities. Whether you are a budding or experienced athlete, you won't know where to start. The country is ideal for trekking: you can explore the Andean paramó for several days without meeting a living soul, but also climb volcanoes with glowing craters and mountains with snow-covered peaks, which sometimes familiar with the sky at more than 6?000?m , and gallop in the wind on the tracks once marked by the Inca messengers... In Baños and Misahaulli, at the gates of the Oriente, you can try canoeing, rafting, canopy (zip line) or canyoning before cycling along the Waterfall Route. Surfers will reach the best spots on the Pacific coast (Montañita), while others will dive and snorkel in Galapagos or off Puerto Lopez (beach of los Frailes or isla de la Plata). 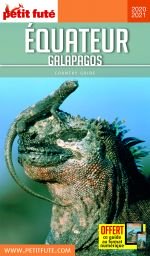