Plan your custom-made trip to
Ethiopia with a local agency !

Why leave to Ethiopia ?

Due to its geographical location and topography, Ethiopia enjoys a very favourable climate for much of the year. From September to March, the sun is shining almost daily and the temperature is constantly mild, between 20 and 25°C on the high plateaus. A small rainy season occurs between early March and April in the South, while heavy rainfall is common from mid-June to September in the North. Lovers of "African warmth" will find their happiness in the lowlands in the east and south of the country, while the most sporty can indulge in the joys of trekking in the coolness of the high mountains culminating at an altitude of over 4,000 m.

Preparing for your trip to Ethiopia

Ethiopia's millenary history includes a diversity and richness that is largely unknown. Never colonized and for centuries sheltered from major external influences, Ethiopia boasts a unique and atypical culture in Africa. This identity is affirmed in fields as diverse as architecture, music, gastronomy and religious practice. Nowhere else on the continent will you find such a cultural mosaic.

Far from the clichés of a desolate land, Ethiopia surprises by the immensity of its fertile expanses. While vast territories are covered by nature "tamed" by man for the benefit of agriculture that is still rudimentary, virgin spaces - some of which are still unexplored - abound with wild life and extremely rich flora. Endemism is the hallmark of this biodiversity; 26 species of mammals, 18 birds and as many amphibians, insects or reptiles are found only in Ethiopia. Concerning flora, far from being fully recorded yet, endemism also represents a very high percentage covering several hundred species.

Ethiopia has only really opened up to tourism about ten years ago and, although its great potential is beginning to be exploited, we are still far from the mass tourism and cultural changes that it too often involves. The weakness of the tourist infrastructures leads the visitor to a total immersion in the heart of people's lives, thus a truly authentic contact, a source of surprises and wonder.

80 distinct languages and cultures, more than 200 dialects, 6 climatic regimes covering desert or savannah areas, high plateau and mountain reliefs sheltering their own fauna and flora, a society marked by the influences of the two great religions, Orthodox and Muslim, and by the survival of ancestral animist rites, these are some of the elements that give an idea of the extreme diversity of this mythical country, a land of predilection of ethnologists, which has never ceased to fascinate throughout the ages.

A sweet scent of adventure

There are as many forms of tourism in Ethiopia as can be imagined, and lovers of thrills and total change of scenery will not be disappointed. Walking or riding a donkey through the Simien mountains, running the Afar desert in the footsteps of nomad caravanners or rafting down the Omo river to meet the animist tribes, in the midst of an abundant wild life, will leave you with unforgettable memories.

A land of myths and legends

Ethiopia is a country that is never fully understood and seems to be moving away as you think you are getting closer. Based on myths and legends, popular history is written in parallel with official history, with which it is often confused. Although largely Christianized and Islamized, the Ethiopian population has developed a kind of syncretism mixing beliefs with spirits, purification rites and traditional medicine that coexist with animist rituals. While one can sometimes feel frustrated by such inaccuracies, even the most rational minds will be bewitched by these founding myths that have passed through the ages and that no Ethiopian would accept to be challenged.

On the African scene, Ethiopia seems to occupy a special place that never ceases to surprise and confuse even African connoisseurs. While Addis Ababa, the headquarters of the African Union, does not hesitate to claim to be the diplomatic capital of the continent, the notion of Africanity as part of this continental group is rather mixed. Egocentric, for a long time reluctant to external influences, Ethiopia is jealous of its particularities and its destiny from which it derives a certain feeling of superiority. Within the territory itself, a kind of unofficial caste structure seems to have emerged among the orthodox inhabitants of the highlands (Amharas and Tigrayans), who have been the guardians of history and power for centuries, the Oromo majority, a group of whom consider themselves disregarded, are struggling against the central power, and the ethnic groups with tribal structures living at the borders of the country according to their own ancestral traditions. These ethnic groups, which bring together "black" Ethiopians - as their compatriots refer to them with a touch of condescension - seem totally foreign to Ethiopian Orthodox mysticism, perpetuating the social structures and ancestral beliefs of an Africa of unfathomable mysteries.

When to go to Ethiopia ? The best time, activities, seasons, climate, temperatures, weather 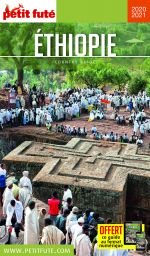