Plan your custom-made trip %
Georgia
with a local agency !

#Majestic and varied landscapes The ubiquity of nature, rural cultures, large wilderness areas: the landscapes of mountainous Georgia have been incredibly spared the industrialization and clearing that marked many post-Soviet countries. Georgia has a queenly, majestic and abundant nature. Destined by Soviet leaders for agriculture and tourism, the country experienced relatively modest urban expansion in the 20th century, so that the countryside and nature still have their rights over a vast majority of the territory. Laughing landscapes, favoured by a temperate climate and fertile land, are the characteristics of most of the regions you will cross.Moreover, for its size - it is as large as Ireland - Georgia has a surprising diversity of climates and landscapes. The Black Sea has subtropical coasts; the Kakhetia of the Azeri border is a semi-desert; not far north, the Alazania Valley is a wine valley. Imertia is made up of a laughing plain and green hills; Kartlie is a rather arid high plateau, sometimes rough, sometimes fertile, bordered by chains and their high peaks. The Tbilisi basin has a Mediterranean feel. The Great Caucasus, the roof of Europe, is a high crystalline wall with deep steep valleys, with magnificent high mountain landscapes; the Small Caucasus is a complex and rugged volcanic relief, lush in Adjara and Gourie, forest in Bordjomi; it is an arid high ground in Samtskhé and a lacustrine plateau, almost lunar in Djavakhétie. All mountain levels are spread over large climatic varieties, from subtropical humidity to steppe aridity. Summer heat, ideal for hiking and swimming in summer, abundant snow for skiing in winter, there is certainly no shortage of natural activities, whatever the season of your visit.
A rich human heritage :

The whole country is dotted with vestiges of the past, witnesses of a brilliant ancient civilization. While medieval urban architecture was largely destroyed by the invasions that tore the country apart, Georgians have managed to preserve churches and monasteries, built over the centuries in splendid natural sites, protected from the mountains and valleys. More than 3,000 religious monuments have been recorded there; in all, Georgia has some 5,000 historical monuments, rich relics of a brilliant blend of indigenous traditions and the different cultures that have crossed the country. Persian, Turkish, Byzantine, Russian, Armenian or German influences have mixed with local cultural currents to give a contrasting heritage, straddling the West and the Christian or Muslim East. Wherever you are in the country, you will find an ancient and grandiose architectural site: a fortress in ruins on a rocky peak, a chapel, a church or monastic complex, a troglodytic installation, a mountain village with defensive towers, the ruins of a mosque or a synagogue.In the 19th century, the Russian Empire gave its southern markets a rapid urban development that partially resumed indigenous styles and gave rise to a particularly colourful and inventive architecture. Georgia's urban heritage is also rich and fascinating, from spas to prestigious buildings and simple residential buildings. Its quintessence is in Tbilisi, the most majestic city in the South Caucasus, a magnificent blend of centuries. Finally, the typical Georgian habitat has made generations of artists dream, with its balconies, terraces, arbour gardens, inner courtyards, conducive to the country's mild climate...

The traveller: a guest before being a tourist

Georgia is a country that remains away from mass tourism. As you travel across the country, it is a relationship of hospitality that people will develop with you, long before a relationship with the tourist. Even if it is obvious that the foreign traveller has money, in any part of Georgia, especially if it is remote, you will be treated first and foremost as a guest to whom you are proud to show your country. If you are invited to a visit, it is not necessarily to take advantage of it, but because it is sacred to give the visitor a good image of his or her heritage. While this rule is even more true in the regions than in the capital, in a broad sense, the financial aspect is far from being the one that will prevail in your contacts with the population. Enjoy the traditions of hospitality, far from the tourist tours that have distorted the traveller's relationship with the locals.

On all levels, Georgia offers unusual and colourful shows. Artistically, folklore is rich and curious, composed of a mixture of oriental and western accents: deep polyphonic songs, original rhythms, acrobatic dances, varied craftsmanship. Don't miss an opportunity to enjoy it. Georgian cuisine is very original: from khinkalis, juicy ravioli, to grilled kebabs, khatchapouris, fritters and processed cheese, the spices are tasty, special and often unheard of. Georgian soil produces delicious fruits and vegetables and Georgian wine is very famous. Don't miss the opportunity to attend ceremonies, civil or religious. The "soupra", the Georgian banquet, with its rites and toasts, is of a unique and picturesque nature. Orthodox masses illustrate the originality of Georgian spirituality. In Tbilisi, during the year, religious and political holidays mark the calendar, sometimes a remnant of the country's ancient traditions, sometimes a legacy of Soviet-style mass celebrations. But each time it is a unique experience. 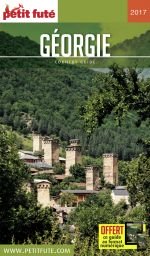