Plan your custom-made trip to
India - Kerala with a local agency !

Why leave to India - Kerala ?

This group of lakes, rivers, canals and marshes, located in the heart of lush tropical vegetation along the Malabar coast, is most often the highlight of a stay in Kerala.A houseboat cruise, slowly sliding along the canals shaded by palm trees, is an unforgettable experience. It is also an opportunity to observe the life of small villages where families live in houses located at the water's edge, while letting themselves be rocked by the serenity that permeates the area.It is an accessible experience even for low-budget travellers. The most frequented backwaters are those in South Kerala but they are also found in the North, near Nileshwar. The most suitable season for their visit is from September to May.

Preparing for your trip to India - Kerala

The Malabar coast offers little frequented white sandy beaches, bordered by palm trees in the north, and more festive seaside resorts in the south, such as Varkala, a real little corner of paradise where you can forget the rest of the world by tasting freshly caught fish and seafood in the shade of coconut trees. Some of these beaches are narrow sandy strips trapped between the Arabian Sea and the backwaters, offering idyllic landscapes (in Mararikulam, on the island of Vypeen in Kochi or in Poovar, in the south of the state).And don't forget that you are in a country where cows have a great role to play, so don't be surprised by the presence of this unusual beach companion.

The intensive use of coconut and the proximity of the coast define the contours of a cuisine that is unique in India. Kerala has been the epicentre of pepper and spice production in India for centuries and trade with other continents has influenced its culinary culture. Often less spicy than that of the North, it offers the traveller an astonishing range of flavours for an often modest price.Thali, a meal served on a banana leaf composed of rice, several dishes in sauce and sometimes fish or shrimp, is the traditional lunch meal.A wide variety of fish and seafood, from the Malabar coast or backwaters, are on the menus: red snapper, king fish, pomfret, swordfish, prawns, lobster and other squids. You can often choose from the day's fishing on the stalls of restaurants and decide how to prepare them: in curry with coconut, grilled, marinated and tanned (clay oven).Mango, papaya, banana (yellow or pink) and pineapple are among the most common fruits, they are also consumed as fresh juice or in a lassi (yoghurt soft drink).

India has almost a hundred national parks, as well as a multitude of nature reserves, some of the most prestigious of which are in Kerala. Hoping to see a tiger in the wild or to observe elephants in their natural environment is an inevitable step. Located in the mountains of the Western Ghats, these parks were created to preserve one of the richest biodiversity in the world, so their access is often limited to guided tours (on foot, by jeep, by boat, or even by elephant!), in order not to disturb an already fragile ecosystem.During the monsoon season, many of these parks close to conduct a population census, so be sure to check before you go. Accommodation is often limited, so it is best to book in advance.

The land of Ayurveda

India is, of course, the country of Ayurveda, "science of life" in Sanskrit. Increasingly popular in Western countries, Ayurvedic medicine is an ancient medical science that is beginning to be accepted by those who are resistant to allopathy. The Ayurvedic method is aimed at the person in its entirety, body and psyche, without dividing it into distinct parts. She uses herbal and mineral remedies, massages and special diets. Treatment can range from one-hour therapy to multi-day sessions, depending on needs, budget and time available. Most travellers who had experienced this experience made positive judgments about treatment. Ayurvedic spa centres are particularly numerous in Kerala - due to the rapid development of tourism - and allow visitors to be pampered in a paradisiacal setting.

Offering one of the most magical visions ever, dances play a major role in the cultural life of the region. Bhârata Natyam and kathakali are among the oldest in the world. In the Kathakali tradition, halfway between dance and silent theatre, the dancers perform roles from Hindu mythology, particularly from the two epics, the Râmâyana and the Mahâbhârata. One of the most interesting aspects of kathakali is its complex make-up code, which indicates the nature and characteristics of each protagonist, particularly through the colours used. The faces of noble male characters, such as the virtuous kings or the divine hero Râma, present a make-up dominated by green. High-born characters with bad ancestry, such as the king of demons, Rava, wear similar green make-up, but with red marks on their cheeks. Extremely angry or excessively bad characters wear predominantly red make-up and a very graceful red beard. Forest dwellers, such as hunters, are represented with a mainly black make-up base. Women - interpreted by men - have bright, yellowish faces...Very different but no less bewitching, Bhârata Natyam (Tamil Nadu) is danced by men and women, to the sound of tabla and sometimes other instruments. In this very ancient sacred dance, every hand position, every eye movement, carries meaning.

The prices charged for this destination are also often an incentive to travel. Relatively low, they are within reach of even a modest budget, provided the trip is planned, with some good advice from locals and some research. In the off-season, a ticket to South India can be up to 40% cheaper. Also, it is worth looking around and taking advantage of the low prices offered by the destination. For about 600  you can find round-trip tickets from Paris-Kochi or Paris-Thiruvananthapuram (via Mumbai or via Abu Dhabi).

When to go to Rajasthan ? The best time, activities, seasons, climate, temperatures, weather 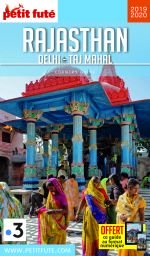