Plan your custom-made trip Japan with a local agency !

#- Because so oriental and so different while being incredibly developed, Japan is full of reasons to travel to discover it. Japan's appeal lies, for example, in the wilderness of Hokkaido, the beaches of Okinawa, the temples of Shikoku, the speed and design of Shinkansen, the size of the megalopolises of Tokyo, Osaka, Yokohama and their bubbling, the tranquility of small villages. Some Westerners will be affected by the variety of landscapes, the aesthetic research in the ikebana floral arrangement, traditional architecture, the meetings of sum?, martial arts, cuisine, manga and Japanese cinema, cherry blossoms in April, Kabuki theatre or the record number of inventions filed each year at the Patent Office... All these elements contribute to the interest that Japan can generate.
A very safe destination :

The natural disasters of 11 March 2011 and 2016 in Kumamoto reminded the Japanese of the sad realities of a capricious nature, particularly on an archipelago built in the middle of a fire belt. It also frightened many travellers, who turned away from Japan and its dangers. But make no mistake, Japan is certainly one of the safest countries in the world to travel alone, as a couple, with friends or with children. Apart from private clubs, the traveller is welcome everywhere, especially as the major events approaching, such as the Rugby World Cup in 2019 and the Tokyo Olympics in 2020, are fast approaching.

An art of living that makes you think

Most of the Japanese population lives on only 20% of the national territory. So with such a density of individuals per square kilometre, it is better to be organized and respectful of others. The traveller who has chosen the land of the Rising Sun as his destination has already intuitively the answer in him. He instinctively feels, from the films, mangas or writings he has read, that Japan is a different way of life. He may have already drank sake, sung karaoke with Japanese friends, listened to the Shakuhachi bamboo flute, participated in the tea ceremony, or attended the Paris-basho, the Parisian stage of the sum? tournaments... He guesses a strange but strange way of life that seems to hold its own.One of the objectives of this guide is to lead the visitor towards an understanding of traditional Japan with its temples, museums and shows. The most interesting thing about this unusual urban landscape for a European is to be able to answer "why is it that..." this reality exists? How is it that Japanese people have the longest and healthiest life expectancy in the world? How is it that Japanese is the only language in the world with ideograms with two parallel reading systems? How is it that Japanese people have particular attitudes of deference towards each other? Why is it that all religions are present in Japan, but that the Japanese are not believers? Why is Japan the record industrial country for low crime rates? Why does one in two Japanese sleep on the train? In this guide, the emphasis has therefore been placed on ways to understand what the Japanese person thinks when he or she acts on a daily basis, how he or she experiences relationships with others. And inevitably, the Japanese way of life is very thought-provoking.

If there are Japanese restaurants all over the world, it's not for nothing. And if the Japanese have one of the longest life expectancies on the planet, neither do they. Japanese gastronomy is an art, the better it is a religion, it is so linked to the elements and the seasons. Fans of fish and other seafood will of course enjoy it, as will vegetarians. Carnivores will be able to taste the best beef in the world, if their purses allow it, but not only that, chicken and pork are also excellent. T?ky? is often cited as the world capital of gastronomy, with the best restaurants in the world (also the most expensive), it holds the record for most starred restaurants. In the countryside, it is the local specialities that we come to taste, at very affordable prices. It's time to discover a healthy cuisine where the little details make the difference.

The country of the link

Japan is surely the country of the link, of all forms of ties and relationships. Here are a few examples. The Japanese house is not only a shelter or a break from the outside world. It is the very expression of the link between the inside and the outside, but unlike the life expectancy of the Japanese, the Japanese house is the one of the industrialized countries that lasts the least long (30 years). We don't say "good appetite" in Japanese, but itadakimasu, something like "I can feed my life". In public transport, many tips are given to ensure that relations between passengers are pleasant. Every single package is wrapped with great care and is always opened with care. The Japanese people's greatest moments are the pleasure at work, sake with colleagues, cherry blossoms (hanami), the five hundred or so handwritten greeting cards sent at the end of the year, life with friends at school and in after-school activities, weekend golf days or the first sunrise of the year. Kaiseki cuisine expresses the link with nature in the presentation of dishes and respect for seasonality. In a word, anything that can link is welcome. One of the most appreciated expressions of the Japanese is Ichi-go ichi-e, "at every moment its meeting". 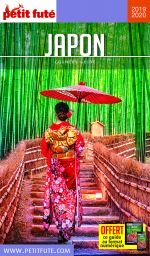