Plan your custom-made trip to
Kazakhstan with a local agency !

Why leave to Kazakhstan ?

In Kazakhstan, you are already in Central Asia, but you have not yet really left Russia. The steppes are Kazakh, the cities are Russian. A unique opportunity to walk between two worlds, two universes, two cultures. The transition will be smooth, with Russians living mainly in the north, but also in the Almaty region, and Kazakhs being very present in the steppe. This is the reason why President Nazarbayev moved the capital to the north. Among the five former Soviet Socialist Republics of Central Asia, Kazakhstan is certainly the one that has maintained the closest ties with Moscow and the Russian big brother. Russian is still one of the two official languages. In the cities, even if all have regained their Kazakh names (Semipalatinsk has become Semey again, Ust-Kamenogorsk has become Öskemen again...), the Russian presence is still extremely strong and some districts will seem closer to Moscow or St. Petersburg than to the idea we usually have of nomad territories.

Preparing for your trip to Kazakhstan

Off the beaten track :

Generally speaking, in Kazakhstan, as soon as you have moved more than 10 km from a railway or bus station, you will be off the beaten track. The country, from a tourist point of view, is in an embryonic state and if hordes of businessmen are already criss-crossing the region for its gas and oil wealth, countless tourist treasures remain difficult to access. In the Aktau region, many underground fortresses and mosques are still waiting for their archaeologists. In the Altai Mountains, there are hardly more than 200 visitors per year, most of whom are researchers or bird enthusiasts. In addition, there are regions that have long been banned, such as Semey, due to nuclear tests, Baikonur for rocket launches and Karaganda for gulags. So many stopovers where you will be among the first Westerners to set foot, which will enrich any stay with a unique feeling of discovery. The counterpart will be to be patient in doing so: the infrastructure is in its infancy and tourists have little help waiting for local agencies except to book tickets.

This is your paradise on earth. The steppe covers 82% of Kazakhstan's 2.7 million square kilometres. When we know that the average density of the country is 6 inhabitants per km2, lovers of solitude and vast infinite spaces will have no difficulty in deciding to leave. By train, it is possible to cross the country in three days without seeing a single person through the window outside the small villages steps. To take full advantage of it and make it a short walk, you will nevertheless need a solid organization or the support of a reliable local agency, because no tourist infrastructure has yet developed in what constitutes the vast majority of the country.

While Central Asia is the most landlocked region in the world and farthest from any open sea, Kazakhstan has two seas on its borders. One, the Aral Sea, which it shares with Uzbekistan, is tending to rise from its ashes, but even at the current rate, it will take many years for it to reach the level it reached in the 1960s, if it ever does. Forget beach tourism in the Aralsk region. On the other hand, the swimsuit will be a must to go for a dip in the Caspian Sea, on the few beaches around Aktau, which are beginning to be organized with hotels, deckchairs and parasols. Especially pleasant in summer, when the thermometer climbs to around 50°C!

Remnants of the Cold War

History buffs will have a great time in Kazakhstan with the many sites that can be visited (provided they are well organized and have good local contacts), each of which is a unique testimony to the Cold War and the development of the USSR: the Baikonur cosmodrome for the star race, the Semipalatinsk quadrilateral for the arms race, Aralsk for the disappearance of the Aral Sea, Karaganda for the gulags... Many agencies have grasped that the tragedies that had struck these regions could today constitute a major asset for development in the field of tourism and, if it remains difficult, both in terms of organization and security, to organize excursions to Baikonur or Kurchatov, it is nevertheless possible and, of course, exciting.

When to go to Kazakhstan ? The best time, activities, seasons, climate, temperatures, weather 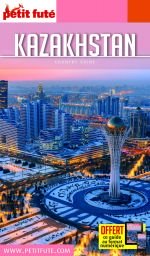