Plan your custom-made trip to
Latvia with a local agency !

Why leave to Latvia ?

R?ga, the geographical centre of three Baltic countries, founded in the 12th century by the Knights of Sword, offers a very rich cultural heritage due to its diversity. Successively part of the Kingdom of Poland with an excellent quality of life. It is mainly due to the many cultural activities and events organized in major cities. In addition, nature has a special place in the hearts of Latvians who aspire to calm and slowness. Parks, rivers and lakes are the guests of honour, all the way to the downtown core of the capital. This greenery offers R?ga a peaceful and provincial face far from the stress that characterizes Moscow or Paris. R?ga always provides visitors with a sense of well-being and safety. Beer and vodka flow freely from Wednesday evening to Saturday evening in the city centre.

Preparing for your trip to Latvia

An excellent quality of life :

It is mainly due to the many cultural activities and events organized in major cities. In addition, nature has a special place in the hearts of Latvians who aspire to calm and slowness. Parks, rivers and lakes are the guests of honour, all the way to the downtown core of the capital. This greenery offers R?ga a peaceful and provincial face far from the stress that characterizes Moscow or Paris. R?ga always provides visitors with a sense of well-being and safety. Beer and vodka flow freely from Wednesday evening to Saturday evening in the city centre.

The coasts of the Baltic Sea

A country of fishing and seaside tourism, Latvia has a maritime border longer than its land border, with 500 km of coastline covering the western part of the country: from Liep?ja to Ainai, via Ventspils and J?rmalaThis long Latvian coast opens the doors to a world of tradition and know-how. Barefoot in the fine sand, embrace the wild beauty of the Kurzeme dunes in search of pieces of raw amber that you will only find in the Baltic Sea, a rare but possible discovery in the aftermath of a storm.Gastronome, you will see scrolling before your eyes, on the markets, dried, grilled, salted or marinated fish. Note that in summer, the water temperature can reach 20°C and you can therefore swim in it.

If you were asked which country is the 10th most biodiverse country in the world, you would certainly not think of Latvia. However, with very little industrial production, Latvia can take advantage of its unspoilt nature.The presence of areas prohibited to any human activity, the low level of industrialization, as well as the deep respect of Latvians for nature contribute to the fact that the region is the last stronghold of many animal and plant species.This respect extends to the heart of towns and villages with the unexpected presence of a garbage can and an ashtray every 20 metres. When you return, you will probably regret the cleanliness of the Latvian sidewalks.

A multilingual and open people

One of the characteristics of small states is the multilingualism of its inhabitants and Latvia is no exception. By its history, the Latvian people must have spoken German and Russian. English is the compulsory language at school, needless to say that it is universal for business but also for politics.With the accession to the European Union (EU), even though Latvian has become one of the official languages of the EU, French, Italian and German are gaining more and more ground. At R?ga, you can easily communicate in several languages, if you go to the west of the country (the Kurzeme, Zemgale and Vidzeme region) Latvian will be required, if you go to the east, you will also be able to speak Russian in the Latgale region.

A living museum of pre-Christian and medieval Europe

Evangelized late and superficially, Latvians, perpetually under the domination of a different ethnic group, attached particular importance to their folklore and mythology, characterized by pagan rites.Even today, they still occupy a very important place in Latvian culture and daily life. Unlike a Frenchman, the Latvian, tall or short, will be able to sing you a popular or traditional song.Pagan traditions are also found during holiday celebrations such as Christmas, Easter, Saint John's Day and the Day of the Dead (November 1). For example, the tradition of dressing up (as animals, pagan deities or symbols like Death with the Scythe) is as important as going to church on December 24. For Easter, gigantic swings are installed in the countryside and in the cities. Saint John's Day, the most important pagan festival in Latvia, is the main celebration of Latvia, well before Christmas.These rites should not seem unknown to you if you consider the Indo-European roots common in Western Europe before the advent of Christianity.During the Soviet era this rich folklore was miraculously preserved by the Latvian people, partly thanks to Stalinist doctrine that promoted the diversity of nations, attacking religion above all and not mythology.

With an area of 64,589 km2 (one tenth of France), a population of 2 million inhabitants (one million of whom live in the capital), Latvia is a small country but with an important geostrategic situation. Located on the sea route between the West and Russia, but also 4 hours by car from two other Baltic capitals, Tallinn and Vilnius, and 7 hours by car from St Petersburg, this territory has been coveted by major powers over the centuries.The slightest internal trip requires no more than 2 hours and a traveller who is thirsty for discoveries can easily travel every day to collect as many memories as possible. This proximity does not prevent a great diversity of customs and landscapes: from the white sandy beaches of the Kurzeme coast to the Latgale lakes, from the medieval and Renaissance castles to Vidzeme or cities like R?ga and Liepaja, marked by Art Nouveau.

Latvia is a European country, joined the EU on 1 May 2004 and today Latvian is one of the official European languages. In 2004, 70% of Latvians voted for EU membership.

When to go to Latvia ? The best time, activities, seasons, climate, temperatures, weather 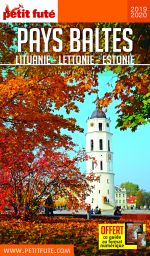