Plan your custom-made trip %
Rwanda
with a local agency !

#A new country After the 1994 genocide, there was nothing left of Rwanda but ashes, blood and tears. Today, the country continues its rapid reconstruction, proud to be a model of resilience. One can only be admiring it, even if everything is not rosy. Kigali, once a sleepy capital, has become an entrepreneurial city that is changing dramatically. We are building with arms: towers are being built, new neighbourhoods are being built. The telecommunications sector is booming: mobile telephony, fibre optic networks, Internet... The country is even planning to become a kind of African Singapore! Elsewhere in Rwanda, asphalt is replacing the tracks, while hotels and restaurants are opening one after the other, proof of renewed confidence and the gradual opening of this country, which has suffered too much from being landlocked, geographically and mentally.
An abundant nature :

Green landscapes, hilly reliefs full of surprises, friendly fauna and flora, surprising lakes: the traveller, and especially the hiker, will find there enough to quench his thirst for nature protected from pollution. To the southwest, the primitive forest of Nyungwe will delight both budding botanists and skilled scientists, but also hikers in search of an eden to explore, smell and admire. In the north, Rwanda is dominated by the majestic Volcanoes Park, all extinct, and there are five of them: Karisimbi (4,507 m), Bisoke (3,711 m), Sabyinyo (3,634 m), Gahinga (3,474 m) and Muhabura (4,127 m). Their wooded slopes are home to a unique species: the mountain gorilla, our distant cousin. This meeting represents the ultimate experience as described by the Anglo-Saxon tourists, who are very numerous in the region. Finally, a third park, to the east, is reborn like a phoenix: Akagera. Even if it has been reduced by a third of its surface area, it remains one of the most beautiful sanctuaries of African fauna (it once again hosts lions and recently black rhinos which have earned it the title of "Big Five"), and benefits from very changing landscapes, between the plain and the striking escarpment, far from the traffic jams of off-road vehicles as in some parks in neighbouring countries...

Rwanda has many other assets: it is easy to reach, at least from Europe, it is protected from mass tourism, its climate is pleasant all year round, its culture has its roots far back in time. His people are not easily discovered, which makes them all the more fascinating. Finally, Rwanda is now one of the safest countries in Africa, having once been the most dangerous country on the planet! Visitors will be able to walk comfortably in both urban and rural areas. This will reassure those who have never set foot in Rwanda, and who probably have a very harsh image of it. But this one quickly fades as soon as you step on Rwandan soil. Tourists will quickly discover a people eager for openness and exchange, and who do everything possible, even if it is still awkward, to welcome them well. Finally, perhaps the most endearing aspect of Rwanda is this: to see the capacity of human beings to rebuild, and to rebuild themselves. You can't take a picture of it, but you can engrave it forever in your memory.

Once a sleepy capital, Kigali is now a city that moves and lives, especially in the evening. Restaurants and bars, there is a wide range of choices, outdoors or not. Some will prefer to stroll through the popular Nyamirambo district with its karaoke, beer scents and tables in the shadows, while others will confine themselves to Kimihurura or Kyovu, more select, with their lounge bars and restaurants with flavours from all over the world. It is everywhere in the city that the nightlife enthusiast will find his happiness. Since the area does not always have visible signs, it is best to identify motorcycle taxi concentrations. That's where it often happens! As for football matches, it is impossible to miss them, as there are so many screens... And during the day? Choice of: swimming pool, golf, tennis, hiking, bowling, horse riding, cycling, bookstore, idleness.... Almost anything is possible. 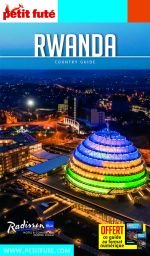