Plan your custom-made trip to
Ukrainer with a local agency !

Why leave to Ukrainer ?

If Ukraine today seems obvious to us, in reality, it has only very recently emerged from its current borders, while all its regions have had very different histories: On the one hand, the Crimea has seen the great Roman and Greek trading peoples, as well as many nomadic peoples such as the Scythians and especially the Tatars who, fascinated, have made their homes there; on the other hand, the west of the country has never ceased to pass from one hand to the other - the Grand Duchy of Lithuania, Poland, Moldova, the Austro-Hungarian Empire. It is therefore not surprising to note the immense richness and variety of the landscape, urban planning and architecture that can be found in Ukraine and which constitutes its major asset. The west approaches Vienna or Krakow, with Lviv built as a typical city of the Mitteleuropa, with its castles and fortresses typically European. To go to Ukraine is to immerse yourself in the history of all Europe and the greatest civilizations.

Preparing for your trip to Ukrainer

Mountain ranges, lush vegetation, endless beaches, bright colours and wide open spaces... In the Carpathians, nature is still practically untouched. The mountains seem never to have known man's step. The lakes and rivers are as if frozen in a blessed eternity, only the leaves golden with autumn seem to waltz to the surface. The steppes as far as the eye can see that stretch along the Dnieper, on the coasts of the Azov Sea, to the Black Sea, plunge into a completely different atmosphere - that of infinity and intact natural heritage. And then there are the magnificent yellow steppes of Askania Nova, the marshy regions of Polesia, the green forests of the northeast of the country, the unusual landscapes of the mouth of the Dnieper will enchant you with their authenticity. Ukraine will seduce all nature lovers.

Variety of excursions and activities

Ukraine is such a diverse country, that you can enjoy all kinds of tourism and activities. All summer long, the Dnieper welcomes many cruises that allow you to discover magnificent landscapes and visit the Cossack Sitch in Zaporijia. The Odessa region offers a wide range of expeditions: hiking, discovering the wine village of Chabo, swimming in the sea, windsurfing and even visiting the catacombs. You can also spend a few days in the famous Zatoka Bay, where the waters of the Black Sea and the Dniestr meet. The beautiful and unspoilt Carpathians are a place for invigorating walks in the fresh mountain air, rest in spa resorts and discovery of the Swabian people, the oldest inhabitants of the places and pillar of Ukrainian culture. Between the steppes of the South-East, natural reserves and zoo with the most diverse animals, Ukraine is an attractive country, where originality and diversity are the order of the day.

One would not suspect when arriving in Ukraine of the richness and architectural variety that one can see there. Religious buildings are pure wonders. Just mention the Hagia Sophia church in Kiev, built on the model of Hagia Sophia of Byzantium, which remains the sign of the conversion of the Eastern Slavic world to Christianity. Kiev has many other beautiful religious buildings: the cathedrals of Saint-Michel, Saint-André and Saint-Vladimir. Not far from Kiev, the city of Chernihiv is a small architectural jewel where you can visit the remains of very old churches in a beautiful natural setting. To the west, Lviv is a superb example of a Central European city. In addition, Ukraine is also full of Greek and Armenian churches, which are a real architectural feat. Theatres and Operas also offer the most fascinating tours, the Odessa and Chernivtsi Operas in particular were built by the German architects Fellner and Gelner, who founded the Vienna Opera House. Finally, Ukraine reveals to the curious traveller places of originality and uniqueness that would be difficult to describe as the former residence of the metropolitans of Bukovina in Chernivtsi.

An original and affordable destination

Ukraine is a very affordable destination even for small budgets. Moreover, still far from the traditional tourist routes, Ukraine, apart from Kiev, which is a very popular destination for tourists, is still far from having been taken over by mass tourism. The off-season Black Sea coast and the Carpathians offer a relaxing holiday, off the beaten track and in the heart of the Ukrainian soul. On the margins of Europe, Ukraine remains a "mystery" for many Europeans. Also, whether it is a climbing of the Carpathian mountains or a spring dive into the Black Sea, the discovery will be real and will allow you to meet a unique people, landscapes and sensations.

When to go to Ukraine ? The best time, activities, seasons, climate, temperatures, weather 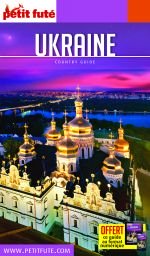