#A welcoming population The population of the East Coast is warm and welcoming. The traveller, throughout his journey, discovers how easy it is to get in touch with the inhabitants who are always ready to talk. We can count on the Americans to inform and help the lost visitor. Feel free to visit the Visitor Centers of the national parks, the highly qualified staff is happy to guide travellers. In addition, the notion of service is generally given great importance in the United States. So it is generally very easy to travel on the East Coast.
A wide range of cultural activities :

Whether in Boston, New York, Philadelphia, Washington, Provincetown, Massachusetts or Baltimore, Maryland, the visitor is delighted with the museums. Washington has priceless treasures in its many museums, including the most famous, the Smithsonian Institution, the National Gallery of Art, the Phillips Collection and the National Museum of Women in the Arts. Most museums are free of charge, a highlight of the United States capital. In Baltimore, at the Walters Museum, another treasure of the country, visitors discover a splendid collection of American and Asian art. In Philadelphia, the Barnes Foundation continues to attract thousands of visitors each year, happy to discover the paintings of the great masters of French Impressionism. The Philadelphia Museum of Art is one of the most beautiful in the country and its collections are of invaluable quality. And what about New York, which alone has 150 museums, including the most important in the West, the MET, as well as the very popular MoMa. In Boston, Isabella Gardner's Venetian palace combines the beauty of the place with artistic richness. Provincetown, located on the Cape Cod Peninsula, has been home to many artists since the last century and is full of original art galleries (on the main street). The East Coast is the ideal place to undertake a cultural-themed tour with stops in major cities from Washington to Boston.

A stay on the East Coast is an opportunity to visit the famous modern big cities of the East, but it also allows you to discover magnificent landscapes, especially along the Appalachians.New England is home to some of the jewels of the United States. The White Mountains, New Hampshire's mountain range, are a must on the East Coast, especially in the fall. Hiking enthusiasts, and outdoor sports in general, are celebrating. The waterfalls invite you to swim before taking the road again on the small paths that criss-cross the forests with their warm tones. In summer, you can enjoy refreshing yourself in the lake region in the south of the state, including the gigantic Winnipesaukee. On the state border, Vermont is not to be outdone with the Green Mountains, another favourite destination for a beautiful escape into the wilderness. Further west, New York State unrolls its Finger Lakes before the famous Niagara Falls fireworks display. The Adirondack Wilderness and the thousand islands of the Thousand Islands will make the traveller forget that Manhattan's hectic life is only a few hours away.Interested in wildlife? Direction Maine to search for the famous moose on the roads of Acadia National Park, a mountain island deposited on the steel blue ocean. And then there are the long wild beaches of Cape Cod, Martha's Vineyard and Nantucket in Massachusetts, and further south, the coasts of New Jersey or Chesapeake Bay.A historical and cultural melting pot in the United States, the traveller will be no less seduced by the exceptional natural environment of this part of the United States... It's not just the national parks of the American West!

Seafood is a must for any stay on the coast. How can we not give in to the call of the Maryland blue crabs? And the famous All you can eat menu which gives the visitor the opportunity to make an orgy of this shellfish at a lower cost, with a hammer in hand! And what about the crab cake fondant... New England, on the other hand, is probably the best place in the United States to eat. In Boston and its surroundings, the specialty is clam chowder, with potatoes, onions and bacon. To be enjoyed with a glass of white wine! This New England dish is on the menus of all Boston and Cape Cod fish restaurants. Going up to Vermont, we are surprised to discover high quality local products and especially excellent cheeses. And here we are soon in Maine, the homeland of lobster, absolutely essential! In roll, steam, brandy sauce... Taste everything... it's a delight. And more than a specialty, it's an experience.In New York, all kinds of restaurants coexist (nearly 24,000 restaurants): the Delis with their procession of Italian and Jewish inspired dishes and sandwiches from Eastern Europe, barbecues, cajuns, tex-mex or African-American soul food. In Philadelphia, the essential specialty is cheesesteak, invented in the 1930s. It is a sandwich made with ground meat, cheese, onions and mushrooms or other ingredients, depending on its taste.In large cities, such as New York, Washington DC, Boston or Philadelphia, the world's cuisines are well rooted in the country's traditions: Chinese, Japanese, Korean, Thai restaurants... European flavours are also not lacking; French bars and Italian trattorias are in demand. Depending on the city, there are many Cuban and Puerto Rican restaurants, and you can even learn about tasty and original Ethiopian cuisine in Washington DC. Finally, there is no shortage of gourmet restaurants, especially in New York, where there are many starred restaurants, but also in Washington, D.C., where the Michelin guide awarded its first stars in 2016.

The cradle of the American nation

The United States was born in this part of the East Coast of the United States, mainly in Boston and Philadelphia. In 1620, the Pilgrim Fathers arrived from England aboard the Mayflower. They landed on the Cape Cod Peninsula in Massachusetts. Boston was founded in 1630 by these "puritans" who were fleeing religious persecution by the English authorities. During the colonial period, the Puritan City - according to one of its many nicknames - resisted the English oppressor. It was in Boston that the War of Independence began in 1770 with the rebellion of the inhabitants against the tax increase, then, three years later, with another insurrection against a new tea tax. Today, Boston is rich in colonial and revolutionary buildings, which can be discovered along the Freedom Trail.A little further south, in Philadelphia, the Declaration of Independence was signed in 1776 by Thomas Jefferson and Benjamin Franklin in Independence Hall. Philly is "America's most historic historic square mile", the richest place in America's history. You can learn a lot about the birth of the United States and the values of freedom and democracy that define the country by visiting the museums in the city's historic district. 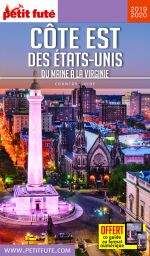