Plan your custom-made trip Zambia with a local agency !

#An authentic and welcoming population A few basic English skills are enough to establish a privileged relationship with Zambians, who are always delighted to meet tourists. This is even more true for Francophone travellers, who are rare in the country. The country has just over 70 ethnic groups spread throughout the country and living together peacefully. Traditions remain alive and traditional ceremonies are still being celebrated, which will delight lovers of cultural tourism. The country also has many interesting community tourism initiatives. Everywhere, smiles and cheerful greetings will punctuate your trip. In addition, Zambians respect foreigners, to whom they are always happy to be of service, in complete discretion, of course. And although there, as everywhere, the usual security precautions remain in place, you will be able to trust the people of this country without fear.
The wildlife :

The country's isolation, vast wetlands and variety of natural habitats have fostered impressive plant and animal diversity. The large fauna of the African savannahs is particularly well represented there with its procession of large predators, its pachyderms and its many species of ungulates, some of which are endemic. Zambia has more than 750 bird species, including the emblematic shoebill, which is a paradise for ornithologists. The country has many and sometimes very large protected areas, which are the subject of particular attention by the Administration and its partners. While tourism is developed, its infrastructure is generally integrated, including Victoria Falls, a prime tourist destination, but whose access road is not congested by souvenir huts. In fact, Zambia still has a real sense of adventure.

There are some names that make you dream. The Zambezi, Africa's fourth largest river (after the Nile, Congo and Niger), is one of them, probably thanks to the mythical Victoria Falls, discovered by Livingstone more than 150 years ago and whose "smashing" beauty still fascinates the traveller. Zambia shares these falls with Zimbabwe, but it is in Zambia, near the border with Angola and the Republic of Congo, that the river originates. Before entering Mozambique and flowing into the Indian Ocean, the river borders Zambia and Zimbabwe. Downstream of the falls, it makes its way through the Batoka Gorge, then widens to Lake Kariba. Downstream of the dam that forms it, it flows between the wonderful Lower Zambezi and Mana Pools parks. A canoe trip on this part of the river will be an unforgettable experience.

A multitude of activities

Safaris, of course, with many opportunities, in 4x4 (game drive or night drive), but also on foot (South Luangwa Park is a model of its kind, with the best guides on the continent) and by canoe (in Lower Zambezi). Photographic specializations are possible with some tour operators, while others are specialized in ornithological safaris. Many other activities are offered in the vicinity of Livingstone, many of which are aimed at thrill-seekers: rafting, bungee jumping (and its variant, the swing gorge), river-boarding, abseiling, but also helicopter or U.L.M. flights, horseback riding or elephant rides, fishing, cruises on the Zambezi River... 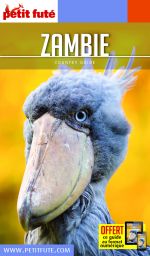