Plan your custom-made trip to
Armenia with a local agency !

Why leave to Armenia ?

Few countries, like Armenia, can claim a history of three millennia. This nation, whose ancient history is attested by the annals of Assyria, Persia and Greece, has survived the benefits of a history that has spared it little and has relegated so many other peoples caught up in the wheel of time to books. This feeling of being miraculous in history coexists among Armenians with a deep joie de vivre and a desire to share it. The news shows us that "The Wounds of Armenia" (a classic of Armenian literature of the great 19th century writer, Khatchadur Abovian) are still alive; but if the public is informed of the genocide of 1915, the earthquake that struck Soviet Armenia in December 1988 or the war with Azerbaijan and the economic difficulties that marked independence in 1991 after 70 years of Soviet rule, they are less aware that Armenia has a rich history and traditions that the country, alive and well, intends to preserve while developing in a difficult context. A country that has emerged from the depths of time, where myth blends in with history, everywhere present, despite the relentless efforts of successive waves of invaders to make a clean slate of it, and history also blends in with current events, still marked by the collapse of the Soviet world in which the country was one of the actors. Refugee at the bottom of a remote valley behind the walls of a fortified monastery, on an isolated plateau whose steep slopes protect the fragile colonnade of a Hellenistic temple, or more simply scattered across the fields in the form of these "cross stones" (khatchkars), the most striking lapidary testimonies of Armenian identity, history challenges us at every step. On the heights of the capital Yerevan, from modernism under the seal of Soviet urban planning that a new generation of architects adapted to the guns of the day, the remains of the citadel of Erebouni remind us that the city was contemporary with ancient Assyria at the time of the kingdom of Ourartou, in the 7th century BC. On another tree-lined hill, the 1915 genocide memorial stands out against the backdrop of the snow-covered cap of Mount Ararat where Noah's Ark ran aground. Symbol of the durability and rebirth of the Armenian people, this mythical mountain, now located in Turkish territory, dominates the Yerevan plain, like a lighthouse guiding the traveller's steps through the maze of mountains and parades in Armenia.

Preparing for your trip to Armenia

The diversity of the landscapes :

Armenia is a very small point on the world map but nature expresses itself with a surprising diversity. On a territory no larger than Belgium's, it brings together a whole range of landscapes, declaring the mountain in all its modes, with the variations that this induces on the climate as well as on the vegetation. An open-air mineral museum that fascinates geologists with the variety of its rocks, which attest to intense telluric activity, Armenia overlays ever-changing worlds. It alternates semi-desert sunburned highlands with deep valleys lined with thick forests, volcanic massifs with softly rounded shapes covered with fat pastures and forested mountain ranges with jagged peaks crowned by eternal snow. While the scorching sun of the continental summer burns the Yerevan plain, it only takes two hours to reach the heights of Mount Arakadz (4,090 m), the highest point in Armenia, with its tundra vegetation and snow. In winter, the polar atmosphere is guaranteed, a layer of snow, more or less thick depending on the region, covering the country. The aquatic element, deified in pagan Armenia, is not to be outdone: the mountains are cut by deep gorges where rivers flow in the impetuous course. Above all, Armenia has its pearl, Lake Sevan, an immense reserve of fresh water in its high mountain setting, itself extending to almost 2,000 m above sea level, which gives its seaside touch to this mountain world. In other words, this wide variety of landscapes opens up a whole field of activities, from the practice of sport to meditative contemplation, designating Armenia as a land of choice for ecotourism. Hiking and horseback riding, trekking, rock climbing, mountaineering, canyoning, sailing, paragliding, skiing, snowmobiling - and other activities in which local tourism professionals are beginning to take an interest - provide an alternative approach to Armenian nature.

In Armenia, tourists are considered as "guests" (hür), and that is what they are called. This shows how hospitality is part of local customs and is practiced as a true national duty. If this name sometimes offends the sensitivity of Armenians in the diaspora, who feel offended to be considered guests in their second homeland, the visiting host cannot complain about it. And if he tried to avoid the attack of prodigality to which he was subjected, or to make a polite or judged refusal, it would be the turn of his Armenian host to feel offended. Despite the difficult economic conditions, this sense of hospitality has been maintained, and the inhabitants make it a point of honour to respect it. Their reputation and that of their country depend on it, and the traveller must experience this legendary Armenian hospitality, of which the art of the table is one of the privileged modes of expression. The language barrier may sometimes be an obstacle, but the rich folklore and the varied and tasty Armenian cuisine, sprinkled with sweet wines and brandy, as is customary in this country whose legend says that Noah planted the first vine there, after the Flood, will help to bypass it, flattering the most demanding palates.

As a crossroads of civilizations, Armenia has suffered, throughout its history, from the often brutal encounter between East and West, but it has also benefited from it. Occupying an eminently strategic location on the ancient Silk Road, it has seen waves of invaders from the steppes of Central Asia break through and aroused the lust of neighbouring powers who fought there. Yet, while he was constantly frustrated by the scorched earth policy imposed by the invaders, the artistic genius of the Armenians was able to flourish during periods of relative independence and peace, and even under foreign yoke, transcribing into the stone of churches or the illuminations of manuscripts an art born from the encounter between East and West. If the vagaries of history have not allowed large Armenian urban complexes to remain, such as the former capital "with a thousand and one churches", Ani, whose imposing ruins, now in Turkey, are visible from the territory of Armenia, hundreds of buildings, mostly religious, but also fortifications and caravanserais, bear witness to the splendour of medieval Armenian architecture. Initially considered a regional branch of Byzantine art, Armenian architecture was given its letters of nobility at the beginning of the 20th century, with some specialists even seeing in this art a synthesis between Eastern and Western influences as a precursor to the novel, a hypothesis that was later challenged. Chapel quarrels that we will gladly leave to specialists, and that make us forget the serenity of churches and monasteries in perfect symbiosis with nature, which give the feeling, whether we are believers or not, of being in these places where the spirit blows.

Off the beaten track

Armenia is not an agreed tourist destination, which has some advantages for those who enjoy travelling off the beaten track. This somewhat atypical character is due to tourist infrastructures that comply with particular standards, at least in many countries of the former USSR, but it is more authentic and sometimes exotic and picturesque. The change of scenery is all the more assured as Armenia is par excellence a country of culture clash, where the encounter between East and West, declined for several decades in a Soviet style, contributes to blurring the visitor's bearings. Armenian Christianity, with its liturgy inherited from Byzantium and its rites sometimes influenced by paganism, is certainly resolutely Eastern. But the contrast is striking between a monastery with a strangely Romanesque silhouette nestled in a landscape of meadows and forests with a false air of French soil and the sunburned plateau that recalls the steppes of Central Asia.And when the scents of skewers and oriental tunes shouted by transistors during a crossover party on the way get mixed up, the Armenian reality appears in all its uniqueness! In Yerevan itself, if the attraction, even the fascination of the West, is visible in the behaviour of a youth sensitive to musical and clothing fashions from the West, propagated by the social networks for which it is fond, nonchalance and phlegm, more oriental than Mediterranean, of a population that invades the café terraces when the sun comes out, remind us, as much as the glazed earthenware of the dome and minarets of the very beautiful Persian mosque of the capital, that the country borders Iran.

When to go to Armenia ? The best time, activities, seasons, climate, temperatures, weather 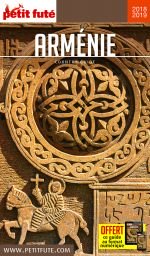