Plan your custom-made trip to
Azerbaijan with a local agency !

Why leave to Azerbaijan ?

Azerbaijan is a crossroads between East and West, a corridor between the Caspian Sea and the Caucasus, and has been influenced by many cultures over the years: Persian, Mongolian, Russian, to name but the most important. This geographical position and cultural variety results in a rich and diversified architectural heritage, which is one of the country's main attractions. The most representative city of this heritage is obviously the capital, Baku, which has been built in successive layers over the centuries. Today, the old city, protected by its solid ramparts, the city of the 19th century oil boom, with its European-inspired colonnaded architecture, and the modern city, with its Soviet accents gradually replaced by the brand new buildings of the new oil boom, coexist here. In a few streets, you can go from a caravanserai made of massive stones - where you can easily imagine the camel drivers of the Silk Road cooling down at the soft murmur of a fountain - to a small Europe of the past century. Two more steps, and the mansions with their ashlar facades are replaced by the imposing volume of the Lenin Museum and by the magnificent shaded promenade that opens Baku to the Caspian Sea.The heterogeneous charm of Baku is only rivalled in the country by the mineral harmony of Sheki. The caravanserais, ancient churches, fortress and richly decorated palace of this northern city make it a must-see destination. A small concentrate of the best that the architecture of the Silk Road era had to offer.

Preparing for your trip to Azerbaijan

Azerbaijan is a Muslim country and, since the fall of the USSR, the song of the muezzin has resounded again on every street corner, in every village in the country. Minarets point their arrows to the horizon, mosques make their domes shine between stone houses, life is punctuated by prayers and religious celebrations. Despite this Muslim influence, Azerbaijan is officially a secular country that remains strongly influenced by the Soviet period, and Islam is therefore particularly tolerant. While in most Muslim countries, access to mosques and holy places is forbidden to "infidels", and even more so to women, Azerbaijan makes it a point of honour to promote the discovery of its religious culture. A simple scarf on the head (all places of worship lend some at the entrance because most women in the country are not veiled) allows you to enter mosques and mausoleums and visit places of pilgrimage. An almost unique opportunity to get to know Muslim culture.This has had a significant and long-standing influence on the country's artistic life. Azerbaijan's rich creativity, as expressed in its architecture and musical and literary tradition, owes much to Persian and Turkish influences. Present in the capital's museums, Azeri culture, including the most traditional, also remains very much alive in the country.Local festivals and the most diverse celebrations are opportunities for musicians to show their talent as mugam singers, and for guests to recite one of the many poems in the local repertoire. A whole ancient and abundant culture survives in the daily life of cities and countryside.

Sea, mountains, deserts, plains, Azerbaijan offers everything you could wish for in terms of landscapes. The beaches of the Caspian Sea, sometimes open to surprising panoramas of oil platforms, are a promise of relaxation for the traveller. The Caucasus mountains offer an almost unlimited choice of treks, on foot or on horseback, to attack the fortresses inherited from the Silk Road or the small villages nestled in the valleys. The desert areas, punctuated by mud volcanoes near the capital, contain archaeological treasures, perfectly represented by the Gobustan site, a few dozen kilometres from Baku. In the central plains of the country, you can get acquainted with the agricultural way of life in the heart of Azerbaijan. Finally, the relatively small size of the country makes it possible to discover all these natural resources in a very short time, which is important. In short, a destination of choice for lovers of nature and exploration off the beaten track.

A charming way of life

Sitting under an arbour by a river, sipping a sweet tea while tasting a piece of cheese accompanied by aromatic herbs and tasty lamb skewers... The rhythm of life of the Azeris is conducive to relaxation, to sharing simple but very pleasant moments! Around a feast of local gastronomy, possibly with a bottle of the famous sweet red wine of the Caucasus, or even a pinch of Caspian caviar, conversations are easily initiated and conviviality is always a must.A visit to Azerbaijan is also an opportunity to discover a rich local craft industry, renowned in particular for its colourful carpets and finely carved objects, made by local blacksmiths that can still be seen at work. A real pleasure for lovers of old or recent pieces, but always produced with a know-how handed down from generation to generation since the flourishing period of the Silk Road.

When to go to Azerbaijan ? The best time, activities, seasons, climate, temperatures, weather 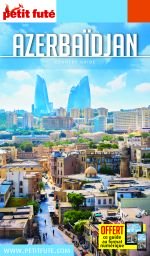