Plan your custom-made trip %
Bolivia
with a local agency !

#Landscape diversity Twice the size of France, Bolivia offers an incredible diversity of geographical and bio-geographical landscapes. Altiplano, Llanos, Titicaca, Yungas, Lípez, Amazonia, so many names for landscapes very different from each other. High plateaus perched at 4,000 metres and surrounded by peaks peaking at an altitude of more than 6,000 metres, endless plains lost at the borders of Brazil and Argentina, desert of stones and volcanoes where temperatures can fluctuate between +20°C and -25°C within 24 hours, intertropical valleys with gentle moisture....For example, you can start a day by contemplating the eternal snow of Huayna Potosí, a mountain range in the department of La Paz at an altitude of more than 6,000 metres, and end it by the edge of a Yungas stream, papaya juice in hand, listening to the song of Amazon parrots.
A population rich in diversity :

11 million inhabitants, including more than 6 million indigenous people who, apart from an identical passport, often have nothing in common. An Aymara from the Altiplano has nothing to do with a Yungueño and even less with an Indian from the Amazon basin. Skin colour, language, traditions, everything is radically different.In this respect, Bolivia is undoubtedly the last refuge of many Amerindian cultures: Aymara, Quechua, Guarani, Tocaña, Essejas, Chimanes... It is not for nothing that the Whipala, the flag of the Andean peoples, holds a unique place in Bolivian culture.All you have to do is walk around La Paz, a city that is a melting pot par excellence, and follow a rainbow poncho or a busy cholita in one of the many popular markets where dozens of colourful and fragrant stalls seem to mix, apparently in the greatest disorder.

A country off the beaten track

A paradoxical observation: despite an eminently rich history and authentic culture, Bolivia is far from attracting as many travellers as it deserves. Unlike neighbouring Peru, successive governments have only recently become aware of the appeal of this heritage. It is relatively common to feel "alone in the world", even when taking the most touristic tours! A godsend for the traveller in search of wide open spaces and authenticity. But enjoy it as soon as possible, such a wonder cannot remain a secret for so long.

Historical testimonies from all over the country

In the vast territory of Bolivia, the pre-Columbian sites that the Spanish destroyed or buried in order to better impose their authority and religion have not yet been identified. As for those already discovered, they are far from being highlighted as they deserve (as is the case in other South American countries).Few people know, for example, the Samaipata fort, an imposing monument in the department of Santa Cruz, carved in rock and a remnant of a mysterious civilization. And did you know that the shores of Lake Titicaca hosted the Tiwanaku Empire, the first great civilization on the continent, whose Incas, centuries later, assimilated and appropriated knowledge, techniques and beliefs? Not to mention the colonial heritage of the cities of Potosí and Sucre, both of which are listed as UNESCO World Heritage Sites.

A living and preserved culture

Bolivia has made some profits from the lack of mass tourism. In particular, it has managed to preserve its traditions and customs intact. Its folklore remains extremely vibrant in all regions and, more surprisingly, in all segments of the population, without distinction; in such a way that ancestral dances and music are perpetuated on the occasion of the many religious or civil festivals that make up the calendar. The most important of these is the Oruro Carnival, which in February brought together nearly 15,000 musicians and dancers from all over the country, making it the largest indigenous carnival on the continent, after the one in Rio de Janeiro. The celebration as an outlet: the figure is known, but remains adapted.

Another paradox, and not the least of them, is that in this country, whose per capita income is on average one of the lowest on the continent, the resources are immense and their limits still unknown. Today's wealth is certainly natural gas; Bolivia has the largest deposits on the American continent. The Potosí mines, most of which were exploited by the Spanish, are considered to be the most important silver deposit ever discovered. And what about the three Bolivians, the "tin barons", who were counted, at the beginning of the 20th century, among the ten richest in the world? Not to mention the incredible lithium resources under the Salar of Uyuni, whose market value is constantly increasing...

A change of scenery and surprises

Bolivia has managed to preserve a rare authenticity, similar to that of Guatemala. Nowhere else in South America will you feel so overwhelmed by the strength and richness of cultures, the harmony of colours and music, the harshness or mildness of the climates, the kindness of a peaceful people. We are charmed by this permanent absence of routine and the surprises it holds. And, for the same reasons, it tires the Western traveller. You don't usually spend your holidays in Bolivia, you travel there. A journey is inevitably being prepared, because uncertainty reigns here as a master. Unless you are satisfied with the traditional circuit that connects the main cities by local buses. Too frustrating, as Bolivia, a country on the other side of the world, is a hymn to adventure, to authentic encounters and to the unexpected that often become our best memories... 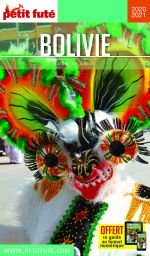