Plan your custom-made trip Germany with a local agency !

#To be surprised.... ...by a contrasted country, as rich in traditions as it is eager for novelties. It has beautiful and lively cities and varied landscapes. Indeed, the sea and mountains are there. Its tourist infrastructure offers establishments with an excellent price-quality ratio.Germany has an important communist heritage through its history. It is also characterized by a classical culture coupled with an avant-garde culture in many areas of contemporary art. Winner of the 2006 football world cup, Germany has a new aura on the international scene. This very hospitable country is rich in tourist attractions worth a visit. During an exploration, you can discover a small chapel nestled at the foot of a hill, Belle Epoque or Baroque alleys in a small town off the beaten track. Germany is always more charming, and offers visitors a host of surprises. This country, a little far from the tourist flows, is well worth the trip!
The German city :

Germany has developed an urban concept that is significantly different from that of its German neighbours. Green, airy, the German city offers a comfortable living environment adapted to work as well as rest and relaxation.It is equipped with many green spaces, creative playgrounds, spacious and well-designed buildings... The Germans are investing in their cities to make them as pleasant as possible. Carried out for 20 years, the conversion of former industrial areas into places of relaxation and culture is a perfectly successful operation.Each city has its own individuality, preserving its traditions and always offering an excellent quality of stay.

From Roman remains to contemporary architecture, from the Romanesque, Gothic, Renaissance and especially Baroque and Jugendstil (Art Nouveau), Germany is a country with a particularly rich heritage. Castles, civil buildings, churches, monasteries, railway stations, shopping malls, monuments, the country is full of the remains of its past of culture and prosperity. Despite the severe losses suffered during the Second World War, the country was able to rehabilitate (or even rebuild) a large part of what was assiduously built by centuries of aristocratic and bourgeois cultures. More recently, modern contributions (for better or worse depending on taste) are far from negligible, and Berlin is a unique architectural "test area" in Europe. Beyond all the classic conventions, we may fall under the spell of a very 1950-2010 Essen, an ultra-contemporary Hafen City in Hamburg, or a Stalinist ensemble in Eisenhüttenstadt, as much as a Baroque Bamberg or a half-timbered Rothenburg ob der Tauber.

A green and developed country

31% of Germany is covered with forests! From the vast northern areas of Brandenburg, Mecklenburg and Lower Saxony to the Harz, the Metalliferous Mountains, the Eifel and the Black Forest, from Saxon Switzerland to the Franconian Mountains and the Thuringia Forest, the forest is a key element of the landscape but also of culture in Germany.Germany is a green country in its natural spaces, mountains, hills or plains, but also in its urban spaces where woods and parks always have a prominent place. And Germans love comfortable and well-managed nature; forests are not only well maintained, but also equipped with all the amenities that often have something to surprise: benches, garbage cans, of course public maps, explanations about the ecosystem.... Not only is the greenery there, but it is easily accessible, equipped and often explained.

Germans often emphasize the autonomy of regions and their differences... And they are not wrong, because the German regions are very different, from dialects to codes of behaviour, gastronomy, architecture and football. While in some countries regional differences have been greatly reduced, German history and the federal system mean that they are maintained here.A Bavarian will automatically distinguish himself from a Lower Saxon or a Hamburger, and he will often be proud of it! Cities like to support their local specificities, we like to imitate accents, praise the types of sausages of the vintage or the way to greet each other... Between a cold, rigorous, discreet, individualistic and "simple" north, and a south with a good franquette, noisier and more bawdy, talkative and paternalistic, according to the cliché, it is true that there are differences. And there are the "Wessis of the West and the "Chassis" of the East, another major difference; among the Chassis, there are those of the South, the Saxons, and those of the North, the Prussians.... Much more diverse than one might think from the outside, Germany reserves surprises, and it would be wrong to think of knowing the country by having gone to Munich with which most Germans do not identify, or to Hamburg, with which the Bavarians will feel foreign...

Germany has a great cultural offer, and the main object of visitors' visit, museums, does not deny it. Museums of Art, History or Science, they are often very well designed, often revised, and the most post-modern approaches now structure most exhibitions. Berlin, Munich, Dresden, Frankfurt, Cologne, Bremerhaven, Bremen, Kassel or Hanover; everywhere there are interesting, rich and well explained museums. Where there is no English labelling, audio guides are available. In addition, ticket prices are often very affordable.These museums are also designed and conceived from a very educational perspective. Within these institutions, it is not a question of scholars wanting to overwhelm the visitor with their knowledge.... On the contrary, we are putting ourselves within the reach of the neophyte, just like the Anglo-Saxon museums. You will have the opportunity to visit many interactive exhibitions, to get involved. Children and families are also never forgotten, as the exhibitions are also accessible to the youngest, presenting the field in question in a playful, experimental and educational way. Excellent museums, therefore to visit absolutely.

Past the traditional taverns and inns that have populated the country for centuries, German metropolises now compete with modern, trendy, comfortable and equally attractive nightlife: bars, cafés, tea shops, clubs, restaurants, all creative, decorative and resolutely contemporary. Because it is an undeniable fact: Germans love to go out; they are creative and dream of transforming their cities to reflect their aspirations. Under the impetus of Moving Berlin, Hamburg, Frankfurt, Leipzig, Cologne, Dresden, Bremen, many others - and even traditional Munich - have embarked on a beautiful urban adventure: to create spaces of exit that match the imagination of today's urbanites. The "café-concept", which originated in the alternative Berlin of the 1980s, has spread and led to a whole family of establishments with often blurred gender boundaries, but whose main idea is to have a soul, to be unique, welcoming, warm and focused on quality of life. These cafés-bars-restaurants, where you can have breakfast as well as spend the night drinking beer, drinking coffee during the day or having lunch at any time, invest in old, unusual buildings, old factories, old bourgeois buildings, communist "blocks", and especially in those Art Nouveau districts which are typically today the "bobo" or alternative districts. Bier-Börse (beer market), Café Cantonna, Unperfekthaus (imperfect house), Hotel Seeblick, so many names that suggest the creativity that goes behind... It is therefore a real pleasure to discover infinite creativity in all these establishments. Whether it is a tea room, a restaurant, a pastry shop, a bar or a café, we visit them just out of curiosity, if only to enjoy the design! A real safari to the bistros to do when travelling! German inventiveness, and tasteful as well, is impressive. 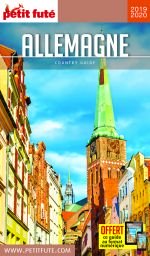