Plan your custom-made trip to
Guatemala with a local agency !

Why leave to Guatemala ?

Guatemala is inseparable from its Mayan heritage, both in its history and geography, yesterday and today. It is in the geographical area comprising part of Mexico, Guatemala and Honduras, which archaeologists call Mesoamerica, that this brilliant civilization was born and was able to develop important scientific knowledge in astronomy and mathematics, impose its power and disappear without anyone really knowing why. Current knowledge has only partially unlocked the secret of scriptures and knowledge, maintaining a halo of mystery around these peoples capable of building gigantic cities that the roots of cheese makers have patiently covered, as if to better protect them from the eyes and hands of lay people. Archaeology enthusiasts will be delighted as the remains of these lost cities, which are at the same time ceremonial centres, places of power, commerce and residence, are omnipresent in Guatemala. The most famous of these cities is the fabulous Tikal, in the north of the country, but Guatemala is also rich in the sites of El Ceibal, Quiriguá and its giant stelae, Yaxhá and its lagoon, El Mirador that can be reached after several days of walking. Other ruins, still buried under the vines of the jungle, only gradually reveal their secrets through excavations or fortuitous discoveries.

Preparing for your trip to Guatemala

The Mayan heritage cannot be reduced to the country's past history. The immense archaeological wealth perpetuated by the ancient Maya must not obscure the current cultural wealth of a population descended from the Maya and of which there are more than twenty different ethnic groups. The most numerous are the Quiché, Q'eqchi, Mam and Cakchiquel Indians, but there are still the Tzutuhils, Uspanteko, Ch'orti, etc. Each ethnic group speaks a particular language and has its own way of life. After visiting some villages or traditional markets, we may learn to distinguish ethnic groups and villages by their traditional clothes and sometimes their social organization. To these Mayan ethnic groups is added an original culture. On the Caribbean coast, Livingston, the country's largest former port, is the "capital" of Garifuna culture. This black community of 6,000 people has a unique history. These former slaves were taken from the black continent and first lived on Saint Vincent, an island in the West Indies where slave ships carrying them were stranded, before settling more than two hundred years ago on the coasts of Guatemala, Belize and Honduras. Their language is a mixture of Arawak Indian, French, English...

An amazing country of diversity

Plant and animal biodiversity is exceptional, as is that of landscapes and people. Cloud forest in the Verapaces where you can surprise a quetzal, silhouettes of extinct volcanoes on the shores of Lake Atitlán, active around Antigua, black sandy beaches on the Pacific coast with a huge mangrove reserve a few kilometers from Monterrico, or green slopes of the highland mountains, lagoons in the jungle on the Livingston side, etc. Guatemala is a land of contrasts where a thousand and one activities are possible, starting with observation.

A land of colours

We will quickly realize the importance that Indians attach to traditional clothing. The costumes they wear, especially in the highlands, are strong elements of identity. Guatemala is a real festival of colours, which explodes completely on market days! Purple, scarlet, turquoise, fuchsia, sunshine yellow! Deep and vibrant colours in the embroideries that cover women's güipiles (blouses)!It is a delight for Western eyes, surprised by so much creativity "invested" in everyday objects. The motifs can be figurative (flowers, animals), more stylized or abstract (geometric shapes) and are specific to each ethnic group.

When to go to Guatemala ? The best time, activities, seasons, climate, temperatures, weather 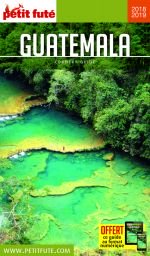