#Fascinating temples It is in southern India that the oldest temples are located, and it is there that the heart of the country beats. The daily life of most of the inhabitants revolves around religion and the offerings made to the many gods in the Hindu pantheon. It is in Tamil Nadu that they are the most impressive and also the most colourful. Rameswaram, with its temple of 22 sacred water wells, is one of the holiest cities in India, attracting both the devotees of Shiva and Vishnu. Madurai and Trichy, temple cities, are also major pilgrimage sites. But in almost every city and village in South India, you can witness religious holidays marked by incomparable joy and fervour. It is an amazing experience to attend all the rituals performed during the ceremonies, an experience that appeals to all the senses.We must not forget to mention the ruins of the Vijayanagar Empire in Hampi, the sites of Mamallapuram or the sculpted caves of Ellora and Ajanta, which constitute the legacy of a glorious and fascinating past.
Paradise coasts :

Beach tourism has been developing since the 1970s, mainly in Goa, but also in Kovalam, Kerala. You will find large beaches lined with coconut palms, not very popular, in the North and South of the State of Goa, but also in Gokarna or in North Kerala. Paradise beaches where you can forget the rest of the world by enjoying freshly caught fish, feet in the sand, and stay in bungalows right on the beach. The beaches of Mamallapuram and Varkala are among the most popular in South India, they are essential stops for those who want to rest before setting off again to explore the roads and meet travellers from all over the world. If your budget allows it, don't miss the tropical paradise of Andaman, with its white sandy beaches and turquoise waters, ideal for diving or snorkeling. And don't forget that you are in a country where cows play a beautiful role, so don't be surprised to see them wandering even on the most beautiful beaches. Backwaters: unique sites in the world

Backwaters: unique sites in the world

This group of lakes, rivers, canals and marshes, located below sea level and along the Malabar coast, is most often the highlight of a stay in South India. A houseboat cruise, slowly sliding along the canals shaded by palm trees, is an unforgettable experience. It is also an opportunity to observe the life of small villages where families live in houses located at the water's edge, while letting themselves be rocked by the serenity that permeates the area. It is an accessible experience even for low-budget travellers. The most popular backwaters are those in South Kerala, but they are also found in the North, near Nileshwar. The most suitable season for their visit is from September to May.

A tasty and sophisticated cuisine

After having experienced the cuisine of North India, many travellers consider that of the South as better. There is a general consensus that food from the North is very spicy while food from the South is milder. This is not quite true, there is a wide variety of cuisines in the South: the moghlai (mogul) style of Hyderabad, the fried chicken of Chettinad, the Portuguese influence in the cuisine of Goa, the central role of the coconut in Kerala... The best meals are often at surprisingly low prices and, although not vegetarian, many travellers enjoy the countless vegetarian dishes that restaurants offer. Thali, a complete meal traditionally served on a banana leaf and served with rice at will, allows you to taste a multitude of them at once.Feel free to taste the famous masala dosa, lentil pancakes with vegetables, especially potatoes: it is a simple dish, but very popular with Westerners... and Indians, who eat them for breakfast. The richness of the coast in fish further increases the possibilities of choice at mealtime, as the day's catch is exposed outside the restaurants.

Each temple in each southern town or village celebrates its own festivities. It is strongly recommended to ask the residents about the nearest holiday location, as these special moments are often among the highlights of the trip to India. Their religious character in no way prevents these celebrations from being festive, celebrations are generally on the agenda more than solemnity and curious spectators are therefore welcome! Among the main festivals, we can mention Holi, the festival of colours, which celebrates the arrival of spring. For a day in March, the Indians throw colored powders at each other in front of their homes and on the streets. Atmosphere guaranteed!

The prices charged for this destination are also an incentive to travel. Relatively low, they are within reach of even a modest budget, provided the trip is planned, with some good advice from locals and some research. Apart from the slightly expensive visa, India is a cheap destination.In the off-season, a ticket to South India can be up to 40% cheaper. Also, it is worth looking around and taking advantage of the low prices offered by the destination. For about 600  you can find round-trip tickets Paris-Mumbai, Paris-Bangalore or Paris-Chennai.

Offering one of the most magical visions ever, dances play a major role in the cultural life of the region. Bhârata-natyam and kathakali are among the oldest in the world. In the Kathakali (Kerala) tradition, halfway between dance and silent theatre, the dancers perform roles from Hindu mythology, particularly from the two epics, the Râmâyana and the Mâhâbharata. One of the most interesting aspects of kathakali is its complex make-up code, which indicates the nature and characteristics of each protagonist, particularly through the colours used. The faces of noble male characters, such as the virtuous kings or the divine hero Râma, present a make-up dominated by green. High-born characters with bad ancestry, such as the king of demons, Rava, wear similar green make-up, but with red marks on their cheeks.Extremely angry or excessively bad characters wear predominantly red make-up and a very graceful red beard. Forest dwellers, such as hunters, are represented with a mainly black make-up base. Women - interpreted by men - have bright, yellowish faces... Very different but no less bewitching, bhârata-natyam (Tamil Nadu) is danced by men and women, to the sound of tabla and sometimes other instruments. In this very ancient sacred dance, every hand position, every eye movement carries meaning.

The land of Ayurveda

Ayurveda, the Sanskrit word for "science of life", is Kerala's specialty and is gaining more and more followers all over the world. An increasing number of patients are visiting Ayurvedic centres to enjoy their health benefits in an idyllic setting.This traditional holistic medicine treats the body, mind and spirit to restore balance in the body. The method uses herbal and mineral remedies, oils, massages and diets adapted to each person.A thorough treatment (detoxification cure, more serious problems) requires at least a fortnight. However, its benefits can be enjoyed through massages or treatments provided in various institutes.Specialized institutes are located throughout southern India, but Kerala is home to the most renowned centres. 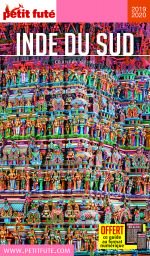