Plan your custom-made trip %
Mongolia
with a local agency !

#A unique way of life Mongolia offers a unique opportunity to discover the way of life of its nomadic populations. To appreciate its richness, you must have slept in the cosy cocoon of a ger, tasted the barely fermented airag at the beginning of summer, savoured the buuz with your family, gathered the herds perched on a horse and listened to the diphonic songs at sunset... Finally, you must have participated in the local festivals by sharing the joie de vivre and the generosity of the populations very attached to the traditions of hospitality and welcome. In July, Naadam, literally a "game" in Mongolian, a national holiday, is an opportunity to admire the skills of archers from all over the country who come to compete against the capital's referees. In the Ulaanbaatar stadium, or on the more modest lawns of the Aimag capitals (or province), wrestlers in camisoles and pointed hats rush, between two fights, for a dance around the beige banners. Further on, the steppes tremble under the hooves of horses thrown at full speed by riders as tall as three apples. Naadam is a popular festival, a game of strength, skill and speed, which immediately plunges into the country's oldest traditions. In winter, Tsagaan Sar marks the Mongolian New Year. Plan a week of banquets punctuated by horse or camel races, polo competitions and competitions organised in the bitter cold of February. So many moments not to be missed, so that a stay in this harsh country is filled with all the joie de vivre of its inhabitants.
A very natural nature :

The first image that this country evokes is that of an almost virgin nature and whose immensity seems to deprive us of landmarks. From the vast steppes of eastern Mongolia to the endless plains of the Gobi Desert, from the snow-covered peaks of the Altai to the depression of the lakes in the north of the country, Mongolia offers an incomparable wealth of landscapes. This largely wild nature is a real paradise for wildlife observers, or simply for those who can be seduced by the sight of a gazelle leaping in the desert or the prospect of miraculous fishing in clear rivers. With 45 species of birds, 12,500 species of insects, more than 2,000 of which have only been observed in Mongolia, 138 species of mammals, about 30 of which are extremely rare (the wild camel, the Gobi bear, the Przewalski wild horse, etc.) and more than 2,800 plants, the country is a true concentrate of nature that just needs to be explored. Mongolia is therefore the ideal place for trekking and horseback riding, which gives you time to contemplate the richness of plants and animals and also has the advantage of not harming an environment in need of protection.

A story that is still alive

The second image conveyed by Mongolia is that of hordes of horsemen set out to conquer the world. The fabulous epic of Chinggis Khaan in the 13th century had made Europe discover these curious centaurs that nothing seemed to stop. It is difficult today, observing the rhythm of life of the peaceful Mongolian nomads, to imagine that they are the descendants of these dominant warriors from a large part of the world! However, the steppes of the country still bear the mark of this page of history, which has been given pride of place in recent years. While the site of the tomb of the most famous Mongolian in history has just been discovered (and remains off-limits to the public), Chinggis Khaan's home region, Hentiy Province, is once again taking an interest in his terrible child. On a national scale, the founder of the Mongolian Empire is once again celebrated, both culturally and commercially: Chinggis vodka, Chinggis bars, stamps, statues, coins... In the east of the country, the city where the emperor was born was even renamed Chinggis in 2014. The great Khaan (Mongolian leader) is everywhere, late revenge on his detractors of the 13th century. Revenge especially on the period of Soviet occupation, 70 years during which Mongolia was cut off from the non-communist world and subjected to the political and economic regimes imposed by the Russians.They had erased the images of Chinggis Khaan, which could have awakened a patriotism that had been dormant for several centuries, and controlled the nomadic populations, whose shifting dispersal was incompatible with the Soviet bureaucracy. Mongolia is just beginning to heal the wounds of this submission period. After centuries of confinement, the country now offers the world these pages of history inscribed in its nature, in its cities and in its people.

A culture in the throes of renewal

Chinggis Khaan is not the only one to take revenge for the bullying imposed by the Soviets. The whole population is now returning to repressed traditions and culture for 70 years. Mongolia has thus once again become the host country of Tibetan Buddhism. And, although Buddhism is much less alive among the younger generations, temples thrive again or are reborn from the ashes after the destruction of the late 1930s. In the countryside, animist or shamanist practices have reappeared, at first timidly, and now in the open. In the west of the country, the ger sometimes serve as a mosque for Muslim Kazakh ceremonies. Everywhere, Mongols celebrate this return to spirituality and are ready to share it with all those who are open-minded enough to follow a Buddhist ceremony and a shamanic rite, an offering to the spirits of the mountain or the desert and a prayer directed towards Mecca! 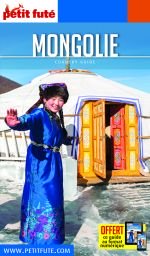