Plan your custom-made trip %
Myanmar Burma
with a local agency !

#Diversified landscapes The multiplicity of climates in Myanmar favours a wide variety of vegetation. Roads are sometimes lost in the rice fields around Yangon, sometimes in the savannah of Bagan, in the jungle of Chaung Tha or in the plateaus of Lake Inle. The white sandy beaches to the west attract travellers, as do the Himalayan mountains to the north. Two rivers flow through the country from north to south, the Ayeyarwady and the Thanlwin. A whole history has developed on their shores and the transport of bamboo on these waters is becoming a real spectacle.
A great architectural diversity :

The English left many colonial-era buildings in Yangon. Converted into an administrative office, these colourful buildings blend with the decor between pagodas and modern buildings. Built in teak wood, the former Burmese residences, whose top floor is open to the four winds, allow us to imagine the slower life enjoyed by the rich owners. Unusual and surprising, the Bagan and Mrauk-U historic sites also represent a specific architectural feature of the country. In Bagan, the temples follow the same model: square base, roof in st?pa, all in small bricks. This system required the overmoulding of a stucco decoration. Unlike these Burmese Buddhist norms, the Mrauk-U site is coarser, but just as magical. Built in sandstone, a sculpted decoration has been directly integrated. This massive architecture, with its underground cavities, is unique in Southeast Asia.

This is a country that brings together about a hundred different cultures. Each minority ethnic group has its own beliefs, traditional dress and original culinary recipes. Open to tourists for only fifteen years, and economically hindered by government ostracism and international sanctions, Myanmar has remained in a different era. Oxen and horse-drawn carriages are still widely used means of transport outside urban areas, ploughing is done with the force of buffaloes and washing on a stone by the river. In the countryside as well as in the city, the Burmese people have remained of a touching innocence that surprises travellers.

Because of (thanks to?) their isolation, the Burmese people show a totally disinterested curiosity. That's why families often invite travellers to dinner with them and don't hesitate to give everything they have to vary the dishes and satisfy their guests. On the other hand, they rarely eat with them. All sitting around a table, the Burmese people prefer to watch these people from elsewhere eat while chatting, which can sometimes be disturbing because they watch the slightest grimace when you bite into an unknown food. Finally, it is preferable not to finish the dishes because, once back in your hotel, the leftovers serve as meals for your hosts. Anyway, without going as far as the invitation, it's impossible to get lost! Each Burmese takes particular care to guide lost tourists. As a thank you, you can accompany them, have a cup of tea and talk for a while. In addition, these smiling people have an incredible patience that is very appreciated when transportation is dangerous. Despite their sometimes unenviable situation, they show remarkable joie de vivre at all times. Add to that the fact that they know how to anticipate the needs of tourists who are sometimes a little lost, and that honesty is natural for them: it is difficult to leave with a bad image of Burmese people!

The country lives to the rhythm of religion. Decisions are made within the temples. The monks enjoy a particular aura and influence over the population, which is perfectly tolerated by the military power that allows the fervour of the faithful to be fully expressed. There are countless monasteries and opportunities to learn more about Buddhism. The monks are very welcoming and will gladly explain to you the Buddhist philosophy that animates the country from dawn with alms to monks and nuns. Other religions are no less well represented, with many mosques, Hindu temples and even churches, proof that the country is more diverse than it seems.

Even if tourism is developing at a high speed, visiting Myanmar remains an adventure, especially off the beaten track. Buses that break down in the middle of nowhere, snakes... For those who want to take risks (measured!) the choice is wide. Elephant rides in the Sein Yé camp, a hot air balloon ride over the Bagan site (very expensive anyway), trekking in the villages around Kalaw or Hsipaw, or simply the adventure of an unknown and unidentifiable dish in a small local station!

As industrialisation has not yet hit the country hard, each village is full of tailors, carpenters and goldsmiths. Bagan is known for its natural lacquer and horse case objects. At Inle Lake, beautiful shawls are made from lotus fibres. The Kachin or Chin women still make longyis by hand and the country's most popular confectionery, jaggery, is taken directly from the palm trees and worked with the power of oxen. Finally, metal workers are meticulous and produce some of the finest and most prized jewellery in the world. Take the time to visit workshops where old techniques are perpetuated, for the happiness of all.

Meditation, the art of the Burmese spirit

The country is one of the most popular destinations for meditation. Most monasteries offer this possibility and foreign visitors will be glad to be initiated by the monks. The attitude of Burmese people towards a life that is not always obvious finds one of its origins in meditation. A few days in a monastery is an excellent way to immerse yourself in a country whose spiritual strength draws its energy from this art of the spirit. It is not necessary to be Buddhist to try it, and you can get a visa longer than the 28-day period for tourists if you have booked in advance in a monastery.

A year of celebration

Every month of the year is an opportunity for religious celebrations. The pagodas are the site of all major events and are particularly popular during the full moons, especially in January. Between the ordination of young monks, Nats celebrations, weddings, full moon day, water festival, tribal New Year's Eve, it is difficult to miss the festivals that bring together the whole community and village and for which everyone is getting ready. Colourful festivals. 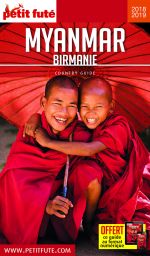