Plan your custom-made trip %
Qatar
with a local agency !

#A modern must Little Qatar thinks it's big and it's interesting to come and understand why. A country is first and foremost its capital, and this one looks its best on the banks of the Corniche, a daring place for world-class museums, has the greatest architects to build the futuristic towers of West Bay, The Pearl and the new smart city of Lusail. Doha is pushing its luck in the middle of the desert to build sports and educational cities to make the richest of our municipalities pale, opening shopping centres like other French fry trucks. Doha, an open-air construction site, a highly structured urban delirium, is a modern must that will delight architecture lovers.
Inside and outside :

Of course it's hot, too hot often. But the traveller escaping from cold Europe or coming from tropicalized French-speaking lands finds in Qatar a form of balance, a skilful balance between refrigerated interiors and the furnace, a thermal trip in itself that we learn to master to make it an asset: thus, nine months out of twelve (June-August not possible!), it is pleasant to enjoy the sweetness of mercury for a delicious and chill-free bath, a dinner in a light dress, a water sports session in perfect home heat, and then to go visit a gallery or lick a few shops in the cool.

A desert at the gates of the capital

Real bonus of the destination, this accessible desert, as in the average suburb of the capital. Less than a hundred kilometres from the buildings, we are in the heart of the giant dunes, in a landscape larger than imagination. Delicious shift of this emirate knowing how to play several scales, from the city in VIP tempo to escapes under the stars. Before the waters of the "inland sea", the Little Prince who is in all of us wakes up and marvels. He trots on the barkhanes, looks at the constellations, gets lost (like us) in the immensity.

A story to tell

Qatar's second bonus, which it does not show easily and which we have tried in these pages to discover. Such a young nation is still looking for the right formula to tell its story, hence some modesty, some dead ends, territories still veiled. We will start with the Souq Waqif ramblas, go to Katara, then to the Museum of Islamic Art, and with this cultural appetite, we will dare the "province", its rare forts, its abandoned villages, the lost petroglyphs, the dig sites. For forty years, French archaeologists have travelled all over the country to make its entrails speak for themselves and we have wished to salute their valour by publishing extracts of their work, also buried in university archives. This land is something other than a collection of supermarkets and large hotels.

More than anywhere else, however, and certainly better than anywhere else, the Gulf is a temple of luxury hotels, an open-air palace with multiple addresses. Thus, for attractive rates when you know how to make your ball-trap on the Internet, the traveller will offer himself a few nights in a bright palace of a thousand lights, oriental palace style or ultra-design style. The following pages present a wide selection of visited and detailed establishments. To each his own taste, according to his means. But there's nothing ratty or approximate here.

Qatar, the showcase of globalization, we are told. True, even if it prevents us from seeing the behavioural turmoil, sometimes the bitterness, of many indigenous people who are not well prepared for this global landing. Since 85% of the population is exogenous, the tempo felt is that of melting pot, multiple and juxtaposed identities, communities in their rites. Doha is constantly playing from one to the other, depending on the place and time, the restaurant or the café. One of the challenges of the trip will be not to confuse the globarabic, Egyptian, Lebanese, Jordanian, etc., with the endemic Qatari, which is very secret.

Security, this universal right so rare, has taken up residence in Qatar. For the casual visitor or permanent resident, it is a simple joy to never feel threatened again, day and night, in a deserted street or in a parking lot. Here, the surveillance is total, permanent, radical, and even those who have nothing to blame themselves for feel it. A non-intrusive, cold observation like the electronics of files and barcodes. Point to point, from the geolocation of communications to the listing of entries in bars and clubs, they know what is happening.

Chanel, Dior, YSL, Cartier, Vuitton, the most prestigious brands seem to have met in Doha, the land of choice for Gold cards! The "malls", covered shopping centres, compete in ingenuity to attract customers, while the franchises of great chefs are gaining ground with Jean-Georges Vongerichten, Gordon Ramsay or Alain Ducasse and the majors of mignardise are laying their boxes, with Dalloyau, Fauchon, Lenôtre, Ladurée 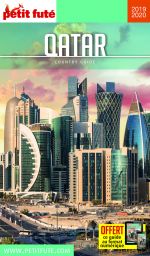