Plan your custom-made trip to
South Korea with a local agency !

Why leave to South Korea ?

The capital of South Korea is one of the largest cities in the world, with no less than 25 million inhabitants, but it is above all a city of contrasts. In the city centre, the extreme modernity and hyperactivity of Asian cities coexist with the serenity of carefully renovated old buildings, and the most lively neighbourhoods are often only a few minutes walk from authentic places where tranquility makes you forget that you are in the heart of one of the most dynamic cities on the planet. A traditional village, known as Namsangol, has even been rebuilt a stone's throw from the city centre and the Myeongdong district. But contrasts are everywhere. In the alleys of Bukchon, the country's most talented craftsmen bring back to life traditions that were thought to have been lost in old houses (some of which have been transformed into guest rooms), while in the heart of Myeongdong, a true temple of fashion, the crowded alleys of fashionista remind us that Seoul has become a privileged shopping destination. Insadong's pedestrian walkways, where dozens of restaurants with tasty specialities are concentrated, contrast with the wide avenues of the modern districts on the south bank of the Han River. The most modern skyscrapers and symbols of economic power compete in elegance and coexist with palaces frozen in the days when the kings of Korea ruled their country. And the many trendy student districts, such as Hongdae, offer a wide range of nightlife options, from restaurants and bars to shops and nightclubs. It is the other face of Seoul, the trendy and relaxed one who refuses conformism. Huge markets, such as Dongdaemun (probably the world's largest fashion market) or the countless shops and amusement parks make Seoul a city that never sleeps, and where it is simply impossible to get bored, whatever your desires.

Preparing for your trip to South Korea

South Korea's main tourist attraction is its concentration of exceptional historical and cultural sites. In Seoul and the surrounding area alone, there are several UNESCO World Heritage Palaces and Temples (ask for a passport for UNESCO sites, and the excellent accompanying brochure at the tourist office), and traces of Korea's rich history are visible throughout the country. Some cities, such as Suwon and its fortifications, Gyeongju with its royal tombs in the city centre, the charming Gongju or the surprising and underestimated Jeonju, are real open-air museums where fortresses, royal tombs and temples blend into the setting. But it is above all the sites built in the middle of nature that are worth a visit. The Bulguksa temple near Gyeongju or the Haeinsa temple near Daegu are real treasures. It is also in Haeinsa that the Tripitaka Koreana, a unique and above all complete collection of Buddhist texts engraved in the 11th century on nearly 7,000 wooden plates, is preserved. A marvel that is the pride of all Koreans, and it is easy to understand why. The temple, a jewel in an ocean of greenery, dates from the 9th century. Several Korean temples host visitors for short stays, offering an introduction to Korean Buddhism, and an unforgettable experience in beautiful settings.The Korean heritage is also its cuisine with its unique flavours. Lovers of spicy cuisine will be delighted, especially with kimchi, cabbage fermented with red pepper. But for others, the Korean barbecue or dishes like bibimbap, galbi tang and bulgogi are the must. Each region has its own specialities of which it is proud, and which it loves to share without limits. Not to be missed. Other facets of Korean culture, such as taekwondo, a national sport, traditional music or panori, singing with percussion, are omnipresent. The Korean alphabet, the Hangeul, was created under the authority of King Sejong the Great in 1443, and is universally recognized as an ingenious invention.Throughout the country, cultural festivals finally follow one another all year round, to the delight of young and old alike. Celebration of masks, fireworks, or traditional ceremonies: check the calendar of events before you leave and make your choice.

It is difficult to stay in South Korea without hearing about the turbulent neighbour to the north. While it is currently impossible to cross the demilitarized zone (DMZ) that has separated the two Koreas since 1953, South Korea remains the ideal place to get close to the most closed country in the world, and even set foot in the United Nations barracks in Panmunjeon, where the Korean War armistice was signed. You must carry your passport to enter the most sensitive areas and comply with security instructions. From Seoul, tours are organized along the DMZ, which is only 50 km away, and offer a timeless journey worth a detour, if only to observe the soldiers of the guard staring at each other on either side of the border. All the hotels in the city and the tourist offices can make the reservation for you. For contemporary history enthusiasts, the Korea War Museum in Seoul is worth a visit, but the city of Cheorwon, northeast of the capital, split in two by the Korean War and originally built in what is now the heart of the DMZ, is the best place to get a glimpse of the destruction of this conflict that killed nearly 4 million people. The programme includes a visit to the famous ruins of the headquarters of the Workers' Party (the North Korean Communist Party), battlefields where the Korean War was written in blood, but also the remains of bridges, railways and roads that once connected the two Koreas, and which now lead nowhere.Those who wish to visit this "other" Korea will have to go on organized tours, most of them from Beijing. While waiting for one day perhaps the DMZ to be opened to visitors to move from one Korea to another....

For several years, on the fringes of political talks, environmental movements have been calling for recognition of the DMZ as a natural park. Due to the absence of any human trace for 6 decades, animal species, especially migratory birds, have in fact taken up residence on this 150 km long by 4 wide strip of land. Wild geese, cranes, deer and other animals of all kinds are the new inhabitants of this gigantic no man's land. While waiting for a recognition that would be a strong diplomatic sign from Seoul and Pyongyang, South Korea does not lack natural parks, regional or national, of all beauty, and often at very short distances from huge cities. Gangwon-do province, east of Seoul (accessible by train or bus), is the largest in the whole country, but also the wildest and least populated. There are several national parks, but also the Yongpyeong ski resort, which hosted the 2018 Olympic Winter Games and is booming. Looking for hiking, extreme sports and skiing, with guaranteed snow coverage every winter? The mountainous regions of Korea are for you. To the east of the magnificent Mount Seoraksan National Park (not to be missed in autumn, when the orange colours cover the mountains, reminiscent of the North American Indian summer), the charming little port of Sokcho symbolizes those small towns in South Korea where economic development has not resulted in a profound change in society, and where the flavours of yesteryear remain omnipresent. To the southwest, the port of Mokpo is another pleasant stopover away from the tourist circuits. South Korea is Samsung, LG and Hyundai and the new technologies exported all over the world, but it is also isolated and peaceful places, a land left almost intact in a beautiful natural setting.

The development of domestic tourism, combined with the modernization of cities, has led to the development of traditional villages throughout the country. Easy to access, thanks to shuttles from the nearest cities, these villages offer a real dive into the Korea of yesteryear. Apart from Bukchon and Namsangol, the closest to Seoul is located near Suwon (known as the "traditional Korean village"), but the most authentic traditional villages are concentrated around Andong in the south-east. If the traditional village of Korea, reconstituted from houses originating from all regions of the country, is the most visited, the small village of Hahoe (listed as a UNESCO World Heritage Site) is undoubtedly one of the most charming places in all of Korea, and an opportunity for a true journey back in time. This "living" village, where the inhabitants continue to live respecting their traditions and practising their activities, also offers some guest rooms for an original and unforgettable stay, in the heart of the Korean countryside. The Korean government is increasingly developing green tourism, of which these villages in each region are a symbol. Discovery of the trades of yesteryear, forgotten traditions and a Korea at a different pace are on the agenda. These villages are also places of leisure: pottery, ironwork and woodcarving workshops; costume shows for all ages; or horseback riding for the pleasure of all. They finally open the doors of the Korean countryside, which seems inaccessible from the major cities, and once in this unique environment, they welcome you.

Jeju, the tourist paradise of the Koreans

The island of Jeju-do, in the south of the peninsula, was for a long time the final destination of the kingdom's exiles. With a much milder climate than the rest of Korea and a beautiful coastline, it is now the preferred tourist destination for Koreans. This "paradise" will sometimes surprise you for its overrated side, and the millions of tourists who crowd the beaches every summer, but also for the wild corners, of great beauty, which still make the island's reputation today one day qualified as "Korean Hawaii". It can be reached by boat, but most visitors choose to fly. Hotels facing the sea, beaches and water sports, hiking on the slopes of its volcano, hot springs.... Jeju symbolizes above all the leisure society now in vogue in South Korea. In Busan, the country's second largest city and a gigantic port from which ferries to Japan leave, there are also a few beaches near the city centre. Across the country, amusement parks, beaches and leisure centres have opened up in large numbers since the country's democratization in the 1980s, and the multitude of sporting and cultural events now held each year are the hallmark of a proud and forward-looking people. 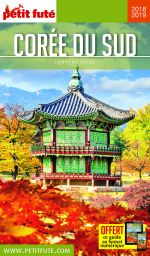