#The meaning of Aloha Hawaiians have a legendary sense of hospitality and hospitality called "?Aloha Spirit?", or "?sens de l'Aloha?". Here residents and travellers alike have an easy smile and dialogue, and we take the time to really talk. In the event of a problem, people will seek to help you by redoubling their efforts. It's a real pleasure.
A melting pot of cultures :

Hawaii, which is part of the Polynesian triangle, owes its multiple culture to a population with surprisingly diverse origins. In order to meet the labour needs of the booming sugar industry at XIXe?siècle, the archipelago has hosted several waves of migration and these workers have settled permanently in Hawaii. Most of the inhabitants are the direct descendants of these men and women who came from China, Japan, the Philippines, Korea, Portugal or even Puerto Rico...And no ghetto in Hawaii, as on the continent américain ! Every Hawaiian comes from an ethnic mix, from at least four different origins, and sometimes it is to lose one's Latin. Some of them are quite incapable of being precise on the subject. Little importe ! What matters is being Hawaiian after all.

It's good all year round in Hawaii. Thanks to the mild trade winds, dazzling sunshine and mild temperatures (between 25?°C and 30?°C), Hawaii is the destination of all seasons.However, monotony is not the prerogative of the archipelago's climate, which still includes 11 of the world's 13 climatic zones. A variation that depends on the elevation, the relief, the exposure to winds, the precipitation on the different islands... Thus at the top of Mauna Kea, on Big Island, or at the crater of Haleakala, in Maui, the freezing temperatures correspond to the climate polaire ! At the same time, however, the coastline of these same two islands is tropical and sunny on the hot sand.

Superlatives are lacking to describe the generous Hawaiian nature... The scriptwriters of Lost - a series shot entirely in Hawaii - did not go there trompés? : although inhabited, these islands are still intact and pure lands today. A kind of lost paradise that could only be a new beginning for the survivors of an air crash, cut off from the world forever. But reality goes beyond fiction because the images in the series do not do justice to the beauty of the archipelago's landscapes. You have to be there and discover these contrées?pour to see how beautiful Hawaii is.The beaches are sublime, and among the most beautiful in the world, like Lanikai Beach, one of the favorite beaches of former American President Barack Obama, whose second home is nearby. As for the many reliefs created by volcanic activity and carved by abundant rivers, they are simply sublime. How can you not be charmed by the green and sharp Na Pali Coast in Kauai or by the lunar relief of the caldera of the Kilauea volcano on Big Island? Not to mention the incredible diversity of fauna and flora on all the islands... As an example, Hawaii's waters alone contain 110 species of fish that can't be found anywhere else. 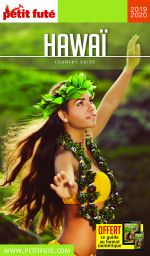