#A cultural cradle The West Coast, and more particularly San Francisco and Seattle, has always distinguished itself by its cultural influence throughout the country. The great American literary and artistic movements, which crossed the last century and influenced much of the Western world, were born among the hills of San Francisco. Whether it is the literary fertility of the first writers of the American West, the humanistic realism of the authors of the Great Depression, the cultural revolution of the Beat Generation poets, the hyper creativity of the Haight-Ashbury hippies in San Francisco or the artistic experimentation of the new generation, the hard-rock and grunge groups born in Seattle, the West Coast has always kept one step ahead of its era.
Hedonism and voluptuousness :

Good wine and good food, what more could you ask for? The West Coast is perfect for the good life: sunny Californian wines, refined cuisine, new flavours and intoxicating aromas are all to be found in this prolific region. Americans are often despised for their junk food and sodas. None of this in a region that has been able to rediscover sensible eating habits, thanks to a craze for fresh, high-quality products and for the very healthy trends that include currents that were once marginal and are now completely in vogue, such as gluten free or veganism. Pacific Northwest's cuisine is renowned for its seafood and the richness of its first-rate local products: crab from the Olympic Peninsula, fruit and wine from the Yakima Valley. California Cuisine", a true culinary revolution born in the Bay of San Francisco in the 1970s, will wake up your taste buds and make you salivate more than once. Add to that a wonderful Pinot Noir from Willamette Valley in Oregon or an elegant Cabernet Sauvignon from Napa Valley's famous vineyards and you're done. A small paradise for fine gourmets and lovers of excellent wines.

On the West Coast, you will receive an exemplary welcome everywhere. As everywhere in the United States: the inhabitants have a culture of service, beyond simple politeness. We will be interested in your career path, we will want to know your vision of things, we will ask you about your experiences and your desires. Above all, we will accompany you on a journey, always with kindness, without ever imposing ourselves, to help you discover the little extras that make up daily life on the spot. Simple and warm encounters with people who are delighted to share their West Coast with you.

The West Coast boasts varied and grandiose landscapes. From north to south and from east to west, the kilometres follow one another but are not the same. Seattle overlooks a bay from where you can see the snow-covered summit of Mount Rainier. The ferry leads to a protected peninsula where lavender fields and rain forests meet. The Columbia River Gorge leads its way between wet cliffs that lead to vast grain plains on the other side of Oregon. The impressive flooded abyss of Crater Lake gives way to the sunny vineyards of the town of Ashland. What can I say about the coast: it is wild, mysterious, hostile, welcoming, covered with tree trunks, covered with light sand, and finally it surprises at the bend of each road.South of San Francisco, Route 1 winds its way along a rugged and wild coast and joins the mystical landscapes of Big Sur and its cliffs. Beyond the Golden Gate Bridge, it is the Pacific coast, mysterious in its almost Celtic mist. It is also the wine valley that gently stretches along sunny vineyards. Further north, we enter the kingdom of redwoods, the giant redwoods that are among the oldest and tallest trees in the world. Back to a prehistoric era still bordered by the ocean. Then inland, it is the Shasta region, fierce and volcanic. A little further south, Lake Tahoe offers turquoise waters in a pine and mountain landscape. Then it's the Sierra Nevada, majestic and white. On the eastern slope, the lunar landscapes of Mono Lake precede the Mammoth Lakes trails. On the west side, it is the Yosemite Park Valley and its incredible natural monuments.

In Washington and Oregon, nature has created the ideal environment for all species of Creation: elk hide in rain forests, birds multiply their colours in the Willamette Valley, pink salmon swim up the clear streams of the Columbia River, grizzly bears roam the immense forests of the Cascades Range.California is home to a multitude of animal species. It is no coincidence that the Californian flag represents a bear: many of them actually live in national parks, as do pumas and other mountain lions. Off the Pacific Ocean, grey whales pass during the season of great migrations. It is a truly unique moment to see these giants off the coast. As for sea lions, there is no need to travel too far: they lounge in the port of Fisherman's Wharf in San Francisco. 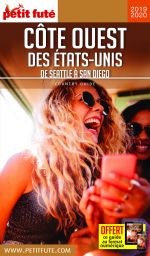