Plan your custom-made trip to
Uruguay with a local agency !

Why leave to Uruguay ?

The country enjoys a relatively stable and temperate climate all year round, although quite humid. Winter is cold and rainy, no tourists come here. But from spring to autumn, Uruguay offers a wide range of temperatures, from rain to blazing sun, with always wind on the coast. Montevideo is very lively during this period, except from Christmas to the second week of January, when the city turns into a real ghost town until the llamadas. In January and February, the very high season, the coast is invaded by Argentines and Brazilians on holiday, prices rise disproportionately. The coast, which is popular with Uruguayans, is cheaper but also has a full coastline. The ideal time to come is from mid-November to mid-December and from early February to early March to enjoy the coast of Rocha and Maldonado. The interior is too hot in the middle of summer, prefer to stay in an estancia during the late season, when the temperatures are milder.

Preparing for your trip to Uruguay

We also come to Uruguay to discover the legendary universe, yet well anchored in everyday reality, of the gaucho, the South American cowboy who leads cattle and herds of horses through the pampas. We repeat, we do not come here to see exuberant landscapes, but to immerse ourselves in an authentic rural world, 100% nature. There is nothing like agrotourism in an estancia to recharge your batteries and discover the flavours and traditions of the country! Often lost in the middle of green meadows, some of these farms are still rustic and basic, involving you in daily tasks, while others have been specially designed to meet the expectations of visitors seeking comfort. You will certainly be surprised by the diversity of styles and the range of offers. On the other hand, prices are quite high.

This 176,220 km² piece of land trapped between two giants, Brazil and Argentina, is still unknown. However, its Atlantic coast is of an exhilarating wild beauty. As you walk along the coast, you feel like you've seen it all over these infinite kilometres of golden sand, because it's not unlike the French Atlantic coast, with its pine forests on the wild dunes. Each site has its own character, which varies according to the seasons. Uruguay's seaside resorts are alternately lively and restless, calm and discreet, wild and unspoilt, and have many faces. The Uruguayan Riviera has its share of upscale villages, led by José Ignacio, followed by La Barra and Manantiales, Punta Ballena, which have dethroned the great neighbour Punta del Este. This one still offers pretty rich corners, but its centre built vertically in the American style and very concreted, punctuated with bars and nightclubs, generally does not please the French very much. The coast of Rocha is more "natural". Far from the major seaside resorts, the banks of the rivers and the beaches of the coastline offer a change of scenery and deserve a visit for their authentic and seductive side.

The Uruguayans are extremely kind. So often compared to Argentines, they are nevertheless fundamentally different and claim their uniqueness. While their neighbours on the other side of the Rio de la Plata have taken up the Italian habit of being guileful, the Uruguayans have a melancholy and discreet side, are rather generous and monastic in their honesty. You will quickly notice that they are curious, available and very hospitable people, not used to European tourists (less numerous in the country than the human tide of Argentines and Brazilians). They like to talk about France, the country of their ancestors for some, their memorable journey to Europe for others. They are particularly proud of their small country, and will regularly ask you if you like Uruguay, wherever you go.

It is important to say it again: Uruguay is the safest country on the South American continent, even if the financial crisis of recent years has somewhat changed the situation in Montevideo, the capital. In the old town during the day, tourists are comfortable in the middle of pedestrian streets. It is advisable to be careful, especially at night in the old town where it is preferable to travel by taxi. In the city, generally during the day, the streets are calm and there is a safe atmosphere. Do not take your passport with you and do not take large amounts of money because purse snatching is nevertheless quite common, but is operated by motorcycles in residential areas with little traffic... where you will probably not go, except to Palermo and Barrio Sul which we recommend you to visit on foot. Low risk but as a precautionary principle, do not carry valuables.

A destination for epicureans

The interest of the destination does not lie in the diversity of its cultural or historical heritage, or even in the richness of its landscapes, but in its gentle way of life and the quality of life it provides to its visitors. Retired people, entire families rightly appreciate a country where we take the time to enjoy the pleasures of life: delicious grilled meat on the traditional parrilla and good wines, horseback rides in the countryside around the estancias, idleness on the wild and unspoilt beaches of the coast, river swimming along the coast, tango evenings in a Montevideo bar after a good dinner in a gastronomic restaurant in the city, not to mention the few traditional festivals that transport visitors back to the days of the gauchos of the 19th century... The Uruguayan is contemplative, calm and not very talkative. He takes the hyperactive on holiday in his quiet quietude, moreover do not be in too much of a hurry, the service is often slow. Take the time to enjoy your vacation.

When to go to Uruguay ? The best time, activities, seasons, climate, temperatures, weather 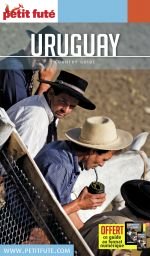