Plan your custom-made trip %
Algeria
with a local agency !

#Authenticity and virginity of exceptional sites Partly because of the dark years that paralysed the country for more than ten years and certainly because of oil, which is holding back the development of other sectors, including tourism, Algeria has not followed the tourist frenzy that has taken over its neighbours, Morocco and Tunisia. Some will see this as a tare, others, on the other hand, will say that it is an opportunity; that Algeria is virgin and protected from all the vices of mass tourism. And it's true. If hotel infrastructures have for a long time lacked comfort, they are really tending to improve and many hotels have been built in recent years in Algeria's major cities such as Algiers, Oran, Constantine and Tlemcen. But, once again, we are far from the mass tourist complexes that can be found in Morocco or Tunisia. So Algeria will charm despite everything who will give himself time to appreciate it, who is a little adventurous and especially who loves tourism off the beaten track. A wild coastline preserved from concrete, ancient remote sites in exceptional environments, a vast desert with little-travelled tracks, strong identities, authentic behaviour and human relations. This is Algeria.
Multiplicity and diversity :

Whether you are a lover of cultural and historical heritage, of vast deserts, of idleness on a beach, of the great outdoors in the mountains or of cities with winding streets, Algeria, as big as France four times, is indeed one of the most beautiful countries in the Mediterranean and the Maghreb. Destinations that generously offer such diversity are rare! Imagine then that during the same day you can pass snow-covered slopes from Djurdjura to the beach, from Roman remains to the palm grove of an oasis, or from the Kasbah of Algiers to a garden of Ghardaa...With its 1,200 kilometres, the Algerian coast is a magnificent wild balcony overlooking the Mediterranean: coves and fine sandy beaches will delight lovers of idleness. Algiers, Constantine, Annaba, Bejaia or Oran, millenary cities, have naturally found a prominent place there. Ghardaa, gateway to the desert - and whose unique architecture has become emblematic of Algerian architecture as a whole - reveals the M'Zab valley and its seven fortified cities in the shape of pyramids surrounded by palm groves. Several centuries ago, sustainable development was invented there, a system of egalitarian water management so rare. To the south and west, Gourara, Touat and Saoura have been built above the palm groves of the ksour as the ultimate protection against the rezzou and sandy blast of the Great Western Erg. In Tamanrasset, capital of the Hoggar, it is the meeting with the mythical desert of the Tuareg. If the Hoggar massif, the Tassili n'Ajjer remain closed to the public, Tam remains accessible for tourists within a radius of about 50 km with the possibility of going to Assekrem, this plateau where the wind whistles, chosen as a retreat place by Father de Foucauld; the magnificent landscapes which culminate at 3 000 m are sublime.The Sahara takes on its full dramatic dimension when it takes our breath away at the top of the Assekrem.To walk through the Tassili of Hoggar (currently closed) a collapsed plateau where the hardest rocks, sculpted and caressed by the wind, have taken on fantastic shapes, is a journey through time and space. In the east, we meet the history of humanity. Above Djanet, the Tassili n'Ajjer and its surroundings (currently closed) constitute the largest open-air prehistoric museum in the world. Kabylia rises to high peaks, covered with snow for most of the year, in a succession of oak and cedar forests and villages clinging to the ridges. The Aures, for their part, between Batna and Biskra, hide in their folds the ribbon of palm trees. The villages nestled against the slopes dominate valleys that are sometimes very steep. Life is hard there but we know how to defend it.

Algeria is dotted with historical landmarks and marks of the passage of civilizations that have shaped it from antiquity to the present day. From the moving and precious rock paintings of the Tassili that have spanned thousands of years, witnesses of the first human civilizations, to the French neoclassical buildings that symbolize massive and devastating colonization, the heritage is considerable, as are the various conquests, occupations, dominations and dynasties... Graves of Berber kings near Constantine, Roman ruins of Tipasa, Timgad or Djemila, Ottoman palaces dating from the regency of Algiers, Spanish fortresses in Oran, mosque of the Almoravid and Zianid periods in Tlemcen, remains of the Kalaa of the Beni Hammad of the Hammadite period...From there, Algeria offers many possibilities of thematic stays.

If, because of the vagaries of history, the fear of being unwelcome in Algeria still haunts some people's minds and hinders them from making the trip, it is time to claim that foreigners are welcomed in Algeria with a warmth that is often lacking in our Western societies. In the street, if the looks may sometimes seem oppressive, know that the only motivation for this insistence is curiosity. It must be said that foreign tourists do not run the streets, especially in the big cities of the North, so the amazement of Algerians to see foreigners taking an interest in their country again is great. What a joy to travel to a country where welcome is welcomed on every corner, where doors open so warmly and kindness is sincere and selfless. 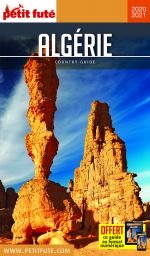