Plan your custom-made trip %
Eritrea
with a local agency !

#A destination yet to be discovered Here, we are far from mass tourism and the cultural changes that it too often involves. Tourism in Eritrea is essentially a local tourism, which lives thanks to expatriates; foreigners who visit the country are quite rare. This ensures you a certain confidentiality and no matter what you do, you will have the pleasant feeling of going off the beaten track, of seeing what many have never seen before. The weakness of the tourist infrastructures leads the visitor to a total immersion in the heart of people's lives, thus a truly authentic contact, a source of surprises and wonder. Different forms of tourism are available to the traveller: explore the rich and diversified architectural heritage of Asmara and Massawa or explore the different natural landscapes characteristic of Africa - bush, savannah, steppe, desert, without forgetting the islands and seabed; try the steam train or sambuk cruise; immerse yourself in local customs and traditions, visiting the many markets or attending the coffee ceremony... The lovers of thrills and total change of scene will not be disappointed.
The mixing of cultures and geographical diversity :

By its strategic location on the Red Sea trade routes since the earliest antiquity, Eritrean culture has inherited a mixed population of diverse origins and influences that have created an atypical culture in Africa. This identity is affirmed in fields as diverse as languages (nine recognized national languages, not to mention other spoken languages, as many different ethnic groups), architecture (art deco, Ottoman, ethnic), gastronomy (traditional or of Italian origin) or religious practice (Catholic, Orthodox or Muslim). Nowhere else on the continent will you find such a cultural mosaic. On the other hand, the contrasts between the different geographical regions - high and arid central plateaus separated by steep valleys, low and fertile western plateaus or hills, coastal sandy plain, Dahlak islands and Afar salt desert - offer extremely varied landscapes for such a small country.

Due to its geographical location and topography, Eritrea enjoys a very favourable climate for much of the year. On the high plateaus, from September to February, the sun is shining almost daily and the temperature is constantly mild, between 20 and 25°C. Fans of "African warmth" will find their happiness on the coast, where the average temperature is 30° in Massawa, except during the summer when the heat can be overwhelming.

Eritreans are very welcoming, always ready to help, eager to talk to the foreign visitor. Receiving a foreigner is an honour for the host who will make it his duty to make his stay as pleasant as possible. The coffee ceremony is the very symbol of Eritrean hospitality: attending the preparation of the coffee, being invited to smell the scent of the roasted beans and giving a critical opinion, before being served several times, are all gestures that bear witness to this culture of hospitality in Eritrea. 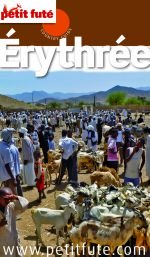