Plan your custom-made trip to
Iran with a local agency !

Why leave to Iran ?

Travellers don't rush to the gate! With 300,000 Western tourists registered, including nearly 20,000 French in the years following the lifting of sanctions, Iran is not among the most popular destinations in the world... It is both a chance and a mistake! A chance inasmuch as you will not live in Iran one of those overrated, rushed and quickly forgotten stays. It is also a mistake, because the country, with its culture three thousand years old, literally loves the one who sticks to it. It is impossible to remain insensitive to the beauty of the landscapes and to this extraordinary ancient, artistic and religious heritage, without forgetting what never fails to seduce visitors: the extraordinary hospitality of the Iranian people.

Preparing for your trip to Iran

A country of reliefs :

Carrier of a rare energy, Iran is shaking on its bases, as if shaken by the incredible telluric forces shaking its subsoil. A splendid country of high plateaus and mountains (including Mount Damavand, which rises to 5,671 m), bordered by the Caspian Sea to the north and the Persian Gulf to the south, Iran offers an extraordinary variety of landscapes. What a contrast when crossing the natural barrier of the Alborz range, between the semi-arid areas and the subtropical Caspian coast! The steppes and infinite spaces of the northeast, towards Gorgan and Machhad, recall the proximity of neighbouring Turkmenistan and Central Asia. With nearly a third of the area covered by the deserts of Dasht-e Kavir and Kavir-e Lut, sand, dunes and gravel also stretch their expanse as infinite to the gates of Afghanistan and Pakistan. Finally, sharing 1,460 km of borders with Iraq, Iran borders the other key historical player in the region, the cradle of ancient Mesopotamia.

As the heir to one of the oldest civilizations in the world, Iran's rich heritage is impressive. The old adobe centre of the city of Yazd and its badgir (wind towers) erected in the heart of the desert, the Elamite ziggurat of Choqa Zanbil, the citadel of Bam unfortunately destroyed by an earthquake in 2003, or the village of Abyaneh built on a mountainside, are all evidence of man's genius and remarkable adaptation to his environment. Let us add the province of Fars, cradle of Persian civilization, where the majestic remains of Persepolis still stand, founded at the end of the 6th century BC by King Darius I, a jewel of Iranian heritage. And how not to mention Esfahan, the prestigious capital of the Safavid Empire in the 17th century, its palaces, royal square, mosques and bridges. And Susa, rival of Baghdad during Antiquity and capital of the Achaemenid Empire, the magnificent caravanserais that punctuate the ancient Silk Road, Macchad (holy city), Nishapur and Tus... The country is home to no less than 21 sites classified as World Heritage Sites by UNESCO (see box).

A mixed and refined people

This rich and diverse heritage testifies to the unceasing crossroads at work and the never-deniable uniqueness of this people. At the crossroads of the Arab, Asian and Turkish worlds, Iran has always imposed its line and path. Land of birth of Zoroastrianism during Antiquity, it converted to Islam after the Arab invasion in the 7th century without however passing totally under the Semitic influence. The Persians are indeed at the origin of the Shia doctrine of Sunni dissidence. Easily assimilating the new codes, they also renewed their heritage in contact with successive invaders. After three centuries of Arabic domination, the Farsi language, under the impetus of the great scholar Ferdousi, thus resurfaced, a sign of the rebirth of Persian identity. Later, in the 13th century, the first devastating Mongols finally came into line to give birth to the Ilkhanid dynasty, one of the most flourishing in terms of architecture. The mausoleum of Soltaniyeh, near Zanjan, is a perfect example of this. This constant comings and goings between the outside and the inside has always fed the Iranian crucible. Azeris, Kurds, Arabs, Balochs and Christian Armenians also belong to this vast group of identity. The millenary art of carpet weaving says a lot about this accumulated memory, which has been rebuilt day after day with patience, science and determination. This refinement, perceptible everywhere despite the theocratic dictatorship, contrasts with the reductive clichés most often conveyed by the press. Lovers of ideas and abstractions, Iranians nevertheless have a very sensual relationship with the world. The taste for poetry, evident in all social classes, finds a remarkable echo in the meditation and fervour surrounding, in Shiraz, the tombs of Saadi and Hafez, Persian poets of the early Middle Ages. Iranian auteur cinema, an almost natural relay for these glorious and prestigious ancestors, perfectly evokes this constant concern for beauty and truth.

Immense, sublime and paradoxical, the former Persian Empire, now ruled by the Shia mullahs, is constantly in the news. A simple dive into the heart of Tehran, a huge and vibrant capital with a population of 13 million (in total on the city), worked by the quarrel between modern and traditional, will remind Westerners, a little confident of their fact, that the children of the Islamic Revolution, who are the vast majority, fight daily, women in the lead, to win their rights, little by little, step by step. This simple historical change, despite the presidential "elections" and the US administration's boot movements, alone deserves a stay in the heart of this fascinating Middle East.

When to go to Iran ? The best time, activities, seasons, climate, temperatures, weather 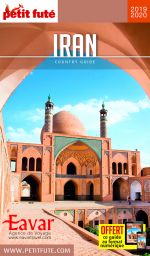