Plan your custom-made trip to
Seychelles with a local agency !

Why leave to Seychelles ?

With a single blow of the wings, for a night, an unaltered beauty! Against a backdrop of Hollywood rocks, paradisiacal beaches, which seem never to have known the imprint of man, as innocent as they are deserted. And a sea-aquarium within reach of snorkels, where damsel fish, butterfly fish and other picasso fish welcome you without an appointment. From the black widow to the coconut dove and the frigate to the straw-tailed frigate, countless birds add to the charm of strolls on fragrant and flowery paths. And in the mythical Valley of May, where the poet-general Gordon located "the earthly paradise... before the fault", the king of palms, His Majesty the sea coconut, whose fabulous callipyge nut was worth much more than its weight in gold: sacred coconut than this cocofess! It's in the Seychelles and nowhere else...

Preparing for your trip to Seychelles

Seychelles: a justified plural, as these islands are so different in shape, size, relief and even origin. 42 granites (up to nearly 1,000 m) and 74 coral reefs (up to 13 m): a total of 116 islands and islets spread over an area of 1,300,000 km2, which consists of 99.997% water and 0.003% of land (i.e. Paris within the city walls). Strong hiking enthusiasts and enthusiasts of "letting go" under the coconut palms have something to be delighted about... on the same island! Hook addicts and diving enthusiasts are also invited to enjoy this captivatingly rich archipelago.

Not the slightest malicious beast (except maybe a few mosquitoes and sand fleas)... and no aggressiveness in the air, even after the abuse of hugs! Seychelles is one of the safest countries in the world, although petty crime has been on the rise in recent years, with the number of safes in hotels increasing. A tourist police force has also been created to monitor some thirty sites that are relatively sensitive to theft. Overall, it is a matter of respecting the usual precautions and not leaving your belongings unattended.

A hospitable and good-natured people. Naturally discreet, the Seychellois is easily bound, as long as it is considered as an equal. Proud, calm and kind, he is also disinterested with the tourist, seeking only to win his friendship. But be careful! Nonchalance has its corollary: here there is no hurry and we quickly forget. And on the photo side, "napa problem": the image hunter's paradise!

As the first country, after Haiti, to have made "lalang kreol" its official language, Seychelles proudly assumes its Creole identity. This is particularly evident during the Kreol Festival (33rd edition from 23 to 29 October 2019). This festival celebrates all the components of the "kiltir (culture) kreol": theatre, song, cuisine and of course "langaz". A pictorial language, often easy to decipher when you are French: thus we say "fer kouyon" to play dumb, "fer zig zig" to make love, "kourpa" (short step) for snail or "pti parol dymiel" (little honey word) for sweet word. A language of atmosphere for an architecture of character: superb heritage as that of Creole residences.

French is the third official language of the archipelago. However, only a part of the Seychelles population is fluent in the language of the first settlers. From La Roche Gratte-Fesse to Chemin Mon Plaisir and Mont Crève-Coeur to Baie aux Chagrins, you can enjoy a treat by detailing the maps! And by discovering the names of the islands that populate the archipelago: Long, Round, Medium, Cousin, Cousin, Cousin, Big Sister, Little Sister... From the smallest islet to the capital island, all have a French name, including the island... Anonymous! Seychellois surnames, also pictured, are essentially of French origin. All you have to do is leaf through the directory to enjoy it: from Florence Dodo to Rosina Bibi and Augustin Banane to Ange Valentin, via Mariette Ladouce, Janet Vénus, Claudianne Cupidon, Sheila Finesse and Jessie Capricieuse, what a bouquet of delicious names! A festival of the French-speaking world takes place at the end of March, with the support of the living branch of the Alliance française. In addition, even Seychellois who do not speak French are making efforts to speak the language with Francophones who cannot express themselves in another language.

When to go to Seychelles ? The best time, activities, seasons, climate, temperatures, weather 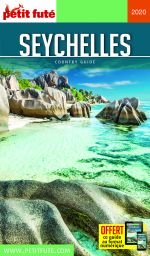