Plan your custom-made trip %
Singapore
with a local agency !

#A gateway to Asia A trip to Singapore is an opportunity to get an express training on Asia. Indeed, the city-state is a condensation of four cultures: Chinese, Indian, Malay and Perenakan, a mixture of Chinese and Malay culture. Let us not forget Western culture, especially British culture, which is not to be neglected. All these cultures, but also all religions, are represented in the micro-State, evolving in good harmony. You will appreciate this multiculturalism as you visit, to see how these different populations coexist on a daily basis. In Singapore, there is also a good chance that your trip will coincide with major traditional festivals.
A gourmet's paradise :

Singapore is undoubtedly the kingdom of the palace because all the multi-cultural diversity is on the plate. For Singaporeans, eating is not an activity that is taken lightly. They will not hesitate to cross the city to eat the best chicken rice, the best fish-head curry or the best black pepper crab, at the best price of course. Thus, choosing a restaurant can be stunning. Which kitchen and in which setting? Because if the offer of cuisine is infinite, the choice of setting is also vast. Lunch of a chicken rice in a food court or tandoori chicken in a Little India canteen, snack around Kaya Toast in a Kopitiam or a high-tea at Raffle's, seafood dinner facing the sea or a seven-hour lamb in a 100% French bistro, champagne brunch around a swimming pool in Sentosa or dim sum in Chinatown. In Singapore, being greedy is not a capital sin, quite the contrary!

A destination for the whole family

Everything works, it is hot and sunny all year round, there is no insecurity (or almost), everyone speaks English. In Singapore, you have access to exoticism without the inconveniences. An easy to live destination for the whole family. Go on a night safari at the zoo, meet firemen and climb the ladder, feed pink dolphins or see crocodiles, museums, exhibitions, amusement parks! Children are not to be outdone in Singapore.

Singapore is a green city. Today, the Singapore Botanical Garden and Gardens by the Bay are the two main emblems. But the city is not limited to its two icons. Although the city is densely populated, a quarter of its territory is undeveloped and some reserves (Bukit Timah, Sungei Buloh Wetland Reserve, among others) are even remnants of the primary forest. Other green areas are spread over the island, sometimes in the middle of the city: Bukit Batok Nature Park, Pasir Ris Town Park, the complex of Mount Faber Park, Telok Banglah Heights and Pasir Panjang, etc.

After 2015, which gave rise to splendid festivities to mark the 50th anniversary of the city's independence, 2019 in Singapore will mark an important bicentenary. On January 28, 1819, visionary Thomas Stamford Raffles acquired a small island at the mouth of a river, at the tip of the Malaysian peninsula, belonging to the Sultan of the State of Johor. This island, where nothing remains, will become one of the most important strategic trading posts for the East India Company, the India Company, and will become the prosperous state we know today. 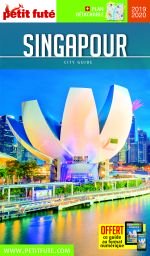