Plan your custom-made trip %
Costa Rica
with a local agency !

#A warm and professional welcome As a pioneer in ecotourism, Costa Rica has made tourism its growth driver. Many general and specialized operators have integrated it and offer professional services, most of which are unforgettable. Every year, the number of visitors continues to grow (3 million tourists in 2018 for 4.9 million inhabitants!). As the majority come from North America and Canada, English is the most common language used to welcome tourists. The Costa Ricans were not used to Americans speaking Spanish, they spontaneously spoke Shakespeare's language after welcoming. As the number of French-speaking visitors increases, the teams often include an operator who knows French. But whether in agencies or hotels, they will be able to meet your expectations with great professionalism. As for the Costa Ricans you will meet at random during your travels, they are distinguished by their kindness, their good humour and their discretion. Don't be surprised that you are greeted spontaneously with a wave of your hand or a smile when you are unknown, it is a way of telling you that you are also at home.
A wide range of activities :

Costa Rica is rich in an environment that allows you to enjoy any activity, whether it is sports, adventure or discovery. In addition to the blissful contemplation of the animal and vegetable kingdoms, you can enjoy surfing (Costa Rica's waves are famous), diving (the most beautiful spot is on Isla del Coco, 500 km west of the Pacific coast!), rafting and canoeing on the rivers that descend from the central mountain range (Pacuare, Reventazón, Sarapiquí...), grandfather hiking as well as extreme hiking in dense forests, climbing, bungee jumping, mountain biking and racing on the roads of the Central Valley (Póas, Turrialba...), numerous horseback rides on the beach... And even total rest in lodges far from everything, where everyone is invited to respect each other and their environment, in their hammock.

Despite its tropical position, which should guarantee Costa Rica a certain climatic uniformity, there are several climates here linked to the differences in altitude and the proximity of the Atlantic and Pacific oceans: if the humid heat of the low plains becomes too overwhelming, there is nothing better than a short trip to the sierra to cool down. And you can even feel a real feeling of cold, as in the surroundings of Cerro de la Muerte or Monteverde Park. Many lodges in altitude run the chimney in the evening. Between December and April, it is the so-called dry season, el verano. It does not rain, the sun is always shining and the temperatures are higher. It is the peak tourist season (la temporada alta): tourists, especially North American tourists, are numerous and prices are obviously higher. Even if they are part of the temporada verde (green season), the months between May and September are frequent. Depending on the year, the rains are more or less abundant. And when they are rare, it's happiness in the low season! Between May and September, during school holidays, there are a little less people - a little less North Americans in fact. But in July and August, the European holiday period is part of the small temporada alta, and hotel room prices are often adjusted to the higher level. On the other hand, in October, the rainy season is in full swing and some establishments take the opportunity to close and make themselves beautiful before reopening in November for the high season. However, it is really difficult to know what the weather will be like and we always advise you to follow the news in case of more dangerous weather episodes.

Very generous and varied - 6% of the world's biodiversity! -Here, nature is protected and respected by all. This is one of the main goals of a trip to Costa Rica. If you are not very receptive to plant and animal wonders, you may get bored: Costa Rica is for nature lovers! Fortunately, there are still the sea and beaches with widespread sport fishing and surfing, which is just as common, but also rivers for adventure sports. As for lovers of flowers, trees, birds, frogs, iguanas and many other animals, they will always find the trip too short.

The majority of beaches are conserved in their natural state and are protected by coastal protection laws. Even if some hotel complexes have not hesitated to flout them and to cover their private beach a little grey with fine white sand - in defiance of the laws of nature - not to disappoint the tourist, the beaches are as we imagine them to be in the "tropics". It is true that we can be surprised by the colour of the sand of some of them (from gold to volcanic black), but they are all beautiful and surprising! From large straight beaches bordered by an evergreen tropical fringe to little frequented coves, from rocky beaches at low tide to natural swimming pools, or calm, transparent waters and crushing waves ideal for surfing... there is something for everyone and the show is at its height during the splendid sunsets (on the Pacific coast).

An unparalleled quality of life

According to expatriates, Costa Rica is the most welcoming country in Central America, and perhaps even America at all. It must also be said that foreigners are well cared for there through many host or investment organizations. In everyday life, and unlike its restless neighbours, there is a great tranquility that goes hand in hand with stability. There is no army and no putsch. Respect for people, nature, life, social peace and democracy are firmly rooted in the country, as evidenced by the national motto:" ¡ Vivan siempre el trabajo y la paz! " (May work and peace live forever!). Nature itself is merciful because, while the risk of volcanic eruptions is always present, there is no cyclone in Costa Rica, a remarkable fact for a tropical country in the Caribbean region. Finally, in conclusion, it can be said that there emerges a philosophy of life that is well characterized by the national slogan "Pura vida". 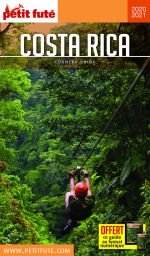