Plan your custom-made trip to
Serbia with a local agency !

Why leave to Serbia ?

Close as we imagine it to be far away, Serbia attracts the French for the idea of a largely unknown and supposedly different land. A key axis of the Balkans, located at the centre of the main roads leading to Athens, Bucharest, Istanbul and Sofia, Serbia has built a strong identity over the centuries, marked by various influences linked to invasions and migrations. Thus, as South Slavs, the Serbs also benefited from Latin and especially Ottoman Turkish influences. The rich and complex history of the Balkans has brought to the country a rare ethnic mosaic. Among the 37 nationalities that make up the Serbian human landscape, you may encounter Ruthenes or Vlachs. By the same token, all monotheistic religions are represented there, and this cultural and religious diversity will be the starting point for a walk between folklore, traditions, gastronomy and architecture.History, which has often been made in pain, has left many traces here: prehistoric and Roman sites among the best preserved in South-Eastern Europe, medieval fortresses that are Serbian, Ottoman and Austro-Hungarian, and of course the famous monasteries, certainly the most beautiful in the Balkans.

Preparing for your trip to Serbia

Serbia is undoubtedly an ideal destination for lovers of holidays in the heart of nature, on the banks of rivers and lakes and more generally for lovers of rural tourism. The Morava, Drina and Tisza rivers alone have more than 1,000 km of waterways: stretching between canyons and gorges, or along wheat plains, they offer the possibility of fishing, canyoning or simply camping in the heart of nature. The Danube, with its 588 km crossing Serbia from west to east, is still the best solution for those who want to discover the country and have a panorama of its riches. At the confluence of Austro-Hungarian and Slavic civilization, the Danube has given rise to many architectural treasures: the Neolithic site of Lepenski Vir, Roman castrums, medieval fortresses and baroque town centres from the time of the Austro-Hungarian empire, especially in Sombor, Subotica, Novi Sad and Apatin, the city of national beer (Jelen)... It crosses regions of different cultures, each with its own folklore and traditions well rooted and carefully preserved by Hungarians, Romanians, Bulgarians and Slovaks, among others.They are also the major cities of historical Serbian culture, with Belgrade, Ni, Novi Sad, Sremski Karlovci (honey museum, vineyards, etc.) and Vrac, from which many cultural movements and institutions have developed. Finally, the largest hunting grounds in the Balkans, such as the famous Karadjordjevo, and the famous Djerdap parade, Golubac, Kladovo offer more sporting activities. You can organize cruises there through an agency or with your own boat.The wealth offered by the Danube has increased the number of tourists in recent years. It is now possible to do large or small cruises on the river and sports such as regattas.www.serbie.travel

The many monasteries built between the 12th and 15th centuries not only shape the landscape of Serbia, but also constitute true testimonies to the richness of medieval architecture and painting. Five monasteries are already on UNESCO's World Heritage List and are protected by the international community: Studenica, Stari Ras, Sopo?ani, Djurdjevi Stupovi and De?ani The best example of this extraordinary density of religious works is given by the Rascie (Raka, in Serbian) southwestern region, neighbouring Kosovo, the first to have seen the birth of Serbian monasteries, even before Kosovo, which has the largest number of Christian churches and monasteries in Europe!At the end of the 12th century, Stefan Nemanja succeeded in forming a centralized state around the Rascia and had several monasteries built, the most important of which was Studenica. His successors at the head of the Serbian state will also each build a monastery, intended to show the splendour of their reign, as well as to welcome their respective tombs: the most famous are i?a, Gra?anica, De?ani, Sopo?ani, Kruedol, Ravanica, Kalenic or Manastir Manasija, near the city of Despotovac. By their decorations and dimensions, these works bear witness to the golden age of Serbian Orthodoxy, and the architectural schools from which they originate will be binding on the entire Orthodox world. In Southern Serbia, it will be the Rascie school; in Central Serbia, the Moravian school.However, the reputation of these monasteries would not be as immense in Europe without the perfection of their wall decoration. Their interior is entirely covered with frescos and murals in bluish and golden tones: when you enter them, you are literally struck by their beauty and the impression of recollection they give off.With more than 36,000 frescoes and more than 10,000 icons recorded, religious painting is Serbia's most valuable heritage asset.www.sv-luka.org/monasteriesA first preview, rich in photos, on the site.

A living folklore and music

Lovers of gypsy music, folk dances or Slavic laments will be in a paradise of bewitching sounds!An impressive number of traditional music festivals and folklore encounters, which have multiplied even more in recent years, will delight all those who have dreamt about Emir Kusturica's film music.Vojvodina is a multi-ethnic melting pot that offers a wide range of music and traditions: Hungarian dances, Romanian or Slovak round songs, with brightly coloured costumes and refreshing cheerfulness; but also tamburai, string orchestras typical of the Danube region.In Central Serbia, there will be a lively and rhythmic kolo dance as well as polyphonic choirs.Finally, in Southern Serbia, the undulating ?o?ek, as well as the haunting melodies, welcome visitors to all the inns.Everywhere, the Gypsies and their brass bands can appear at the bend of a street. As for those who appreciate Goran's records Bregovi?, don't miss the Gu?a festival, the most important trumpet festival in Europe.

A paradise for green tourism

Between medium mountains, hills and plains, Serbia offers many opportunities for tourism in the heart of nature. The mountainous slopes with slopes of all sizes, located in splendid landscapes, invite you, winter and summer alike, to practice mountain biking, paragliding and skiing. Sometimes steep mountain slopes, as well as numerous caves - developed or wild - will delight lovers of climbing and caving. Canyons, parades and rapids allow kayaking and rafting on the Tara, Uvac or Drina rivers. Finally, huge areas at medium altitude, deserts but with splendid flora, offer the opportunity for interesting hikes, trekking and photo-safaris. Parks and nature reserves are full of natural beauties. High lakes, Uvac canyon, Carska Bara bird reserve allow hiking in an enchanting setting. The massifs of Biogradska Gora, Fruka Gora, Tara and Kopaonik are covered with forests inhabited by numerous wildlife. Not to spoil anything, cottages and rural tourism have developed at a high speed in recent years. The villages around Valjevo, Kosjeri?, Kraljevo and Kruevac offer interesting cottages and guest tables. In Vojvodina, it is the sala, these charming farmsteads that are so many rustic but quality guest rooms, while continuing to operate.

There are now some 40 spas and countless hot springs in Serbia, offering a wide range of accommodation and activities. Thermal springs have been exploited since Roman times, especially in the centre of the country. Mineral waters are numerous and rich in various minerals.This explains the multitude of climatic stations in the low mountain regions which, because of their mild climate and the quality of their water, are known for the treatment of pulmonary, neurological or cardiovascular problems. The most famous spas are Vrnja?ka Banja, Banja Kovilja?a, Sokobanja, Mataruka Banja, ?igota Zlatibor or Nika Banja.In addition to these paramedical activities, the always pleasant natural setting as well as the numerous hotel and sports facilities attract tourists in search of calm, relaxing and useful holidays. Some of these resorts, such as Arandjelovac or Vrnja?ka Banja, organize many festivals and cultural events that add some attractions to their natural assets.Association of thermal and climatic resorts36210 Vrnjacka BanjaTel: +381 36 611 [email protected] - www.serbianspas.org

A capital in turmoil

Belgrade, the capital of the former Yugoslavia, has preserved its status as a regional leader. With nearly 2 million inhabitants, it retains the aura it had during the communist era. Since the end of the Miloevi? era, Belgrade has been reviving, transforming, developing and progressing. Partly ruined, like the rest of the country, at the dawn of the year 2000, the city is changing and modernizing but fortunately keeps this Slavic soul that gives it its charm. At the crossroads of two major rivers, the Save and the Danube, from the top of its citadel, the white city has returned to its legendary nights. Here, you will come as much to search for the ancient soul in its streets as for its abundant culture and magical nights. We've come a long way now to celebrate in Belgrade. The world press (The New York Times, Le Figaro and others) continues to praise the wild nights of Belgrade. Don't miss the splavs, these boats - or rather rafts - that are so many bars, restaurants or discos on the Danube or Save.To know everything every day and not to miss anything, these sites will be your Bibles:www.bginfobox.rswww.belgradeeye.comwww.belgrade.inyourpocket.com

When to go to Serbia ? The best time, activities, seasons, climate, temperatures, weather 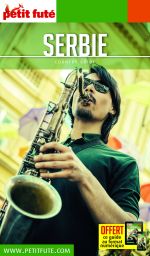