Plan your custom-made trip %
India
with a local agency !

#A total change of scenery "We think we're going to make a trip, but soon it's the trip that makes you, or undoes you," Nicolas Bouvier.The Indian universe is made up of beliefs and devotion. When today's action determines tomorrow's life, the notion of time changes. India and its castes, the will of Karma, the power of destiny. This vision "explodes", makes the Western soul startle, often lost in a material world. The omnipresent force of the sacred, disturbing, opens the unknown door of the divine. "The East to orientate oneself", according to Henri Michaux, because India sometimes acts as a beacon. Coming from the great consumer societies where the spiritual dimension of life tends to fade away or to take a back seat, many find themselves or lose themselves in the esoteric vision of the Indian universe. A shock that will certainly leave no one indifferent. For it is a softer and harder world, where sacred cows will never be crazy, where vegetarian food fills the plates. All visitors who arrive in India for the first time are first lost, without any reference to an elsewhere that exceeds them. The change of scenery is total: the strange caste system, the sacred cows, the venerated cobras, the mysticism of the sadhus, the rickshaws that fizzle, the thousand facets of Hinduism that defy our understanding and so many other things, this journey is like a dream. Dreaming with open eyes is undeniably something to make you want to leave the shore, to sail gently adrift. India allows you to put things into perspective, think for a minute that you are living so that your next life will be better and you will understand.
Magnificent landscapes :

At the foot of the Himalayas, in the heart of the mountains, in the hollow of the cliffs, on the banks of rivers, at the top of the hills, on the bed of the plains, Mother India sings.The North of the country is the refuge of nature lovers, it is the soul of India. The trees, wrapped in flowers in May, bear abundant fruit in September. Water, such a sacred element, is also there; the Manali Valley is reflected in its brilliance. Eldorado is located at high altitude, in a rocky landscape surrounded by snow-covered peaks. The features of the faces are drawn by the cold, the pleated eyes open with curiosity on the unknown. Everywhere the prayer wheels turn and the flags let the prayers fly with the wind.At the top, the Indus River is the cradle of an ancient civilization. Travellers from all walks of life are attracted by these lunar landscapes. And on the road from Leh to Manali, the second highest accessible road in the world, everyone is caught in a whirlwind of pure beauty.Around Leh, the capital of Ladakh, the gompa welcome more or less young Buddhist monks, who strive to respect secular principles. Here life is punctuated by the sound of gongs. The visitor is charmed. In Leh, thin streams of clear water flow through the city, a labyrinth of alleyways the quadrille and the flat roofs complete this postcard setting. In this place, which is conducive to meditation, you don't want anything, you already have everything.

It is almost a tradition in this country which, for thousands of years, has been a land of passages, pilgrimages and cultural crossovers. Indians travel within their borders, and all of them have had the feeling that they are in a "foreign land". They therefore accurately measure the importance of welcoming, and naturally put into practice what can be considered a code of conduct, dictated by religion, but which is nonetheless deeply sincere. Whether you are in the Himalayan mountains, in the central plains, in a bubbling megalopolis or on a deserted beach; whether they are Muslims, Sikhs, Hindus, Jains or Buddhists, there will always be someone to help you, talk to you, share your meal or offer you hospitality. It is up to you to accept this offering that makes any trip to India unforgettable.

Each temple in each city or village celebrates its own festivities. It is strongly recommended to ask the residents about the nearest holiday location, as these special moments are often among the highlights of the trip to India. Their religious character in no way prevents these celebrations from being festive, celebrations are generally on the agenda more than solemnity and curious spectators are therefore welcome! It is not uncommon to come across a lively procession around a road or street. Great feasts can gather thousands of pilgrims who wait for hours to access the sanctuary and offer offerings to the honored divinity. The temple is then decorated with garlands of fresh flowers, it floats a heavy scent of incense and the bells to warn the god of his presence tintinnabulate joyfully.Pujas (common prayers) are also an opportunity to discover animated rituals that differ widely between the north and the south. There is one thing in common: the total absence of obsequiousness. The temple is a place where one comes to give thanks to a god with family or friends. It's noisy, cheerful and lively.

There is a wide variety of cuisines in the country: the Mughlai (mogul) style in Punjab, Chettinad's fried chicken, the Portuguese influence in Goa's cuisine, the central role of coconut in Kerala, Tibetan inspiration in the Himalayas, the variety of thalis in Gujarat... it is possible to travel for months without eating twice the same thing. The best meals are often at surprisingly low prices and many travellers enjoy the countless vegetarian dishes that restaurants offer. Thali, a meal made up of small portions of vegetables and served with rice at will, allows you to taste a multitude of them at once.As you travel through India from north to south, you will find that there is a countless variety of breads, which replace rice in some regions such as Rajasthan. They are made with wheat flour, lentils, rice, chickpeas, baked, steamed or grilled...Spices connect the entire subcontinent and spice up boiled dishes for hours. Each woman creates her own masala, a skilful blend of spices passed like a secret from mother to daughter. Let yourself be surprised and taste a variety of cuisines, often less spicy than you might think. 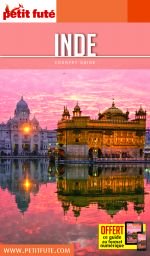